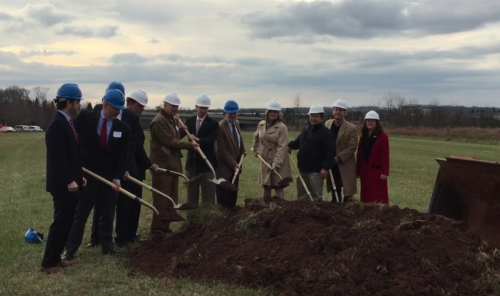 The City of Manassas and Buchanan Partners broke ground yesterday on The Landing at Cannon Branch – a new real estate mixed-use development project in the city.

“The two entities have formed a public-private partnership to develop the city’s only waterfront property, commonly known as Gateway property and located just off of Prince William Parkway, in a way that will spur community engagement and economic growth,” stated a release.

The development includes 40 acres on Gateway Drive – between Prince William Parkway and the Route 234 Bypass, and the Manassas DMV – and will be used to build more than 270 homes, as well as retail, offices, and commercial space, according to a release.

Buchanan Partners is also looking at the feasibility of putting in a brewery or coffee shop at the site, as well as a hotel.

Just last week, the City of Manassas sold the first 9 acres of the 40 acre property to Buchanan Partners for $6 million.

“These proceeds will be reinvested in the community and over the next 6 months, Buchanan Partners will prepare the site and install the utilities that will make residential and commercial construction possible,” stated a release.

According to a release, the project is expected to generate more than $250 million in capital investment, as well as an additional $20 million in land sales proceeds and $3 million in real estate taxes.