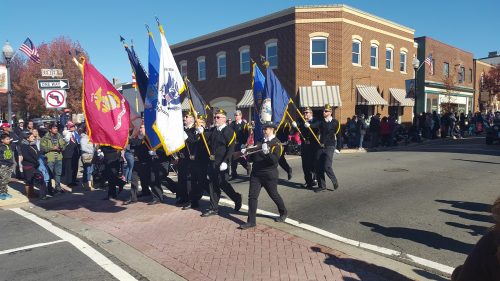 Held each year by VetPar, a non-profit that coordinates programming on honoring military service members and “good citizenship”, is hosting the parade on November 4 at 11 a.m.

The parade will also be honoring the United States Air Force’s 70th anniversary. According to a release, this year’s Grand Marshals are Air Force veterans Ernest Hancock and Steve Krawczyk.

The parade will begin at intersection of Prescott Ave. and Quarry Road.

Divisions A & E will turn RIGHT onto Prescott Ave

Divisions B, C & D will turn LEFT onto Prescott Ave

Parade will follow Prescott Ave around corner onto Center Street, and continue down Center Street to West
Street. Parade will cross in front of reviewing stage at West Street & Center Street
Dispersal will begin at entrance to Harris Pavilion City Lot A

Here are some photos of the event courtesy of Mike Beaty: