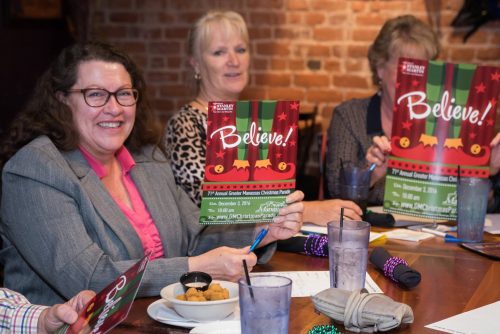 The 71st Annual Greater Manassas Christmas Parade has announced their Grand Marshal and “Woman of the Year”.

According to a release, John Gregory has been selected as this year’s Grand Marshal.

More on Gregory, from a release:

A lifelong resident of Manassas, Mr. Gregory is a veteran of WWII, serving in both the Navy and the Coast Guard, and has been active in the VFW. This founder of Gregory Construction Company has been very involved in his community throughout his life as a founder of Prince William Hospital, a co-founder of Security Bank (now part of BB&T), and as a leader in Lions Club International, as well as, local and state level Republican Committees. He even visited President George H.W. Bush in the Oval Office! John enjoys attending his lifelong church, Bethel Lutheran, with his grandchildren – Taylor, Jessica, and John.

And Robin Perkins was named as Woman of the Year, according to a release.

More on Perkins, from a release:

Many of you may know Robin through her 33 years of service in the treasurer’s office for the City of Manassas where, after 15 years, she rose to the elected position of Treasurer. Having served in that capacity for over 18 years, she will be retiring at the end of this year. A lifelong resident of Manassas, Robin graduated from Osbourn High School in 1974. She enjoys being a scout leader and cookie mom, a youth bowling director, and volunteering with the City Schools. She serves on numerous boards and committees one of which, Manassas Rotary Club, holds an annual Christmas Party and provides gifts and good cheer for residents in the District Home at Birmingham Green. She also has served for many years on the Greater Manassas Christmas Parade Committee. Robin and her husband Clyde have two children, Cheryl and Clyde II, and have been blessed with three grandchildren, Savannah, Shelby, and Wyatt.