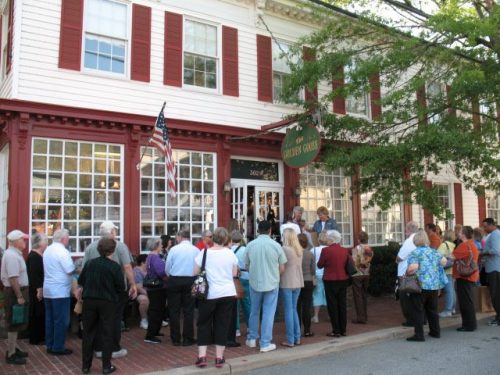 The Golden Goose latest in series of Occoquan shops closing

The Golden Goose, a Christmas shop at 302 Mill Street in Occoquan will be closing its doors.

The business, owned by LaVerne Carson and Pat Bowen, has been in business for almost 42 years.

Carson and Bowen made the announcement this week, saying that they would both be retiring. Over the years Carson was more than an area business owner – she served as the Town’s mayor in 1990 and also as the president of the Business Guild of Occoquan.

“This has been such a difficult decision as we have such fun knowing our customers and in an “old fashioned shop way”, having time to talk and enjoy each of you. The thing we will miss the most is good conversation, discussing how to display your Dept. 56 villages, which Byers’ Caroler would be best in your display and finding just the right ornament for your family,” they said in a statement on their Facebook page.

But this is not the first shop in Occoquan to recently announce that they’d be closing.

Quinn’s Goldsmith recently announced that they were closing their Occoquan location, and several retail shops on Mill Street will be leaving, as a new owner comes in to redevelop the property.

But not everyone in Occoquan’s closing up shop: Third Base, a frozen custard and pizzza parlor, recently opened its doors on Commerce Street.

Starting on December 18, all of the items at The Golden Goose will be 30% off.

They will also be selling all of the fixtures, props, and store related items, with the goal of closing in late February or early March.