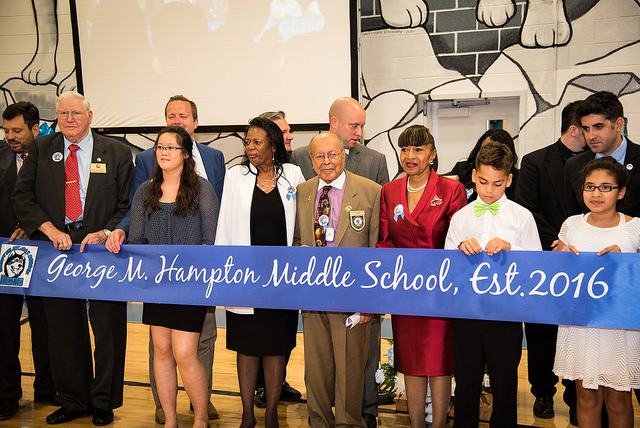 The middle school was previously named for Governor Godwin, who served as Virginia’s governor for eight years in the 1960s and 70s. Godwin was at one time a part of the massive resistance movement, which sought to prevent school desegregation.

The decision to rename the school was the result of a unanimous vote from the Prince William School Board earlier this year, which was met with a great deal of controversy in the county, particularly when it was projected that $500,000 would be spent in the renaming process.

The total for the renaming process was ultimately $265,700.

The 124, 610 square foot middle school, located at 14800 Darbydale Avenue, was opened back in 1970, according to Prince William County Schools (PWCS) documents. The school is majority-minority, with 87% minority enrollment.

According to PWCS documents, Hampton – the school’s new namesake – served as a Lieutenant Colonel in the Army during the Korean War, and later became a doctor and professor at several area universities. Hampton has held appointments on Virginia’s Parole Board, the Virginia Board of Elections, the Virginia Alcohol Beverage Control Board, the Board of Directors for Northern Virginia Community College, and the Board of Visitors for Virginia State University.

Hampton has also been involved with the Phi Lamda Lamda Chapter of the Omega Psi Phi Fraternity, who now operate a non-profit called the George M. Hampton Foundation, according to PWCS.

Hampton’s two children attended the school under its former name.

Superintendent Dr. Steven Walts stressed that the school would not forget its history, and that the name change symbolized a new beginning.

“This is a rededication, or a new beginning of sorts. That does not mean that we’re forgetting all the great things that happened in the school with the other name. In fact, we’re building on all of that success, and we’re moving forward…so why a new name? And why a rededication? It is because we are here to honor a man who has been a pillar in this community, and who can be a role model for every single student,” said Walts.

School Board Chairman Ryan Sawyers stood firmly behind his vote to rename the school.

“Sometimes school boards make mistakes. This school board in Prince William County also made a mistake – in 1969 – when they originally named the school. Progress is a good thing. Progress is about making sure we understand what our future holds, not necessarily forgetting our past,” said Sawyers.

During the ceremony, Hampton quoted President Theodore Roosevelt when explaining his view of public service, saying “We have duties to others and duties to ourselves; and we can shirk neither.”