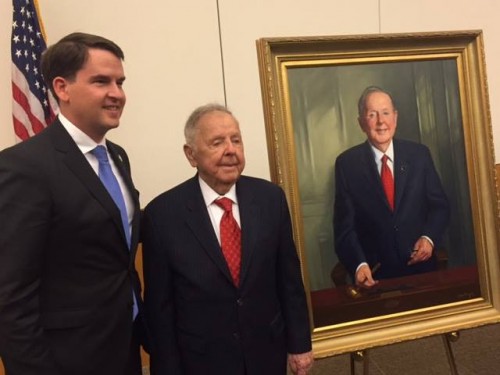 GMU building to be renamed for retired Senator Colgan

A George Mason University (GMU) building has a new name.

Formerly known as the Occoquan Building, located at the GMU Science and Technology campus in Prince William, the building has now been renamed in honor of Charles ‘Chuck’ Colgan, the recently retire and longest-serving State Senator in Virginia’s history, according to a release from State Senator Jeremy McPike.

The building will now be called the ‘Senator Charles J. Colgan Hall’ to honor his 40 years of public service, according to a release.

According to a release, Colgan has been a longtime supporter of GMU, and was a big driver in getting the Science and Technology campus completed in Manassas.

“The senator was known and respected for reaching across the aisle to achieve state objectives, inspiring his colleagues and future public servants to work together for the common good. He was an ardent supporter of higher education, and the architect behind hundreds of millions of dollars invested in our university, Northern Virginia Community College, and universities across the Commonwealth,” stated GMU President Ángel Cabrera in a release.

In addition to the Manassas campus, Colgan has sponsored around $660 million in funding for the school, stated a release.

“I am proud that George Mason University is establishing this legacy that will carry the Colgan name forward for generations and be a fitting tribute to a man with a true heart for public service,” stated Governor Terry McAuliffe in a release.

A dedication ceremony will be planned for the building, according to a release.