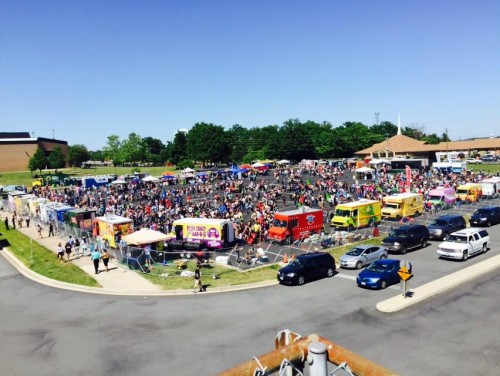 Food trucks have had a surge in popularity in recent years, but for food truck owners that operate in Prince William County, there are no shortage of challenges.

According to VAStrEats Director Jacque Pitts, there are no rules on the books in the county specifically for food trucks that reflect how their businesses operate. Instead they’re lumped in with several other businesses under a peddler’s ordinance, according to Pitts.

“There is nothing in Prince William County ordinances that deals with food trucks directly…[they’re] lumping all of their peddlers together, which is not a good idea,” said Pitts.

VAStrEats is an organization based in the Prince William area that aims to support and lobby for the interests of food truck owners.

“VaStrEats was an organization that was born out of the Woodbridge Food Truck Festival that we had this past summer…we had a lot of questions from trucks coming in to the county, trucks that were licensed in the county. We went to ask this questions, and it was just like whoever you talked to would give you a different interpretation of what they read,” said Pitts.

Pitts made a point of stating that while Prince William isn’t unfriendly toward food trucks, their unclear guidelines for this particular type of business creates roadblocks and confusion.

One rule in particular, which was based on a 2006 zoning determination, limited the amount of time that a food truck can remain stationary to 90-minutes without being in violation, according to Pitts. This rule was actually rescinded in December by the Prince William County Board of Supervisors, following a passionate plea from the owner of the Dave’s Dogs food truck.

“Yes, zoning is saying ‘we’re not enforcing it’, but that’s you. The police could be enforcing it, because there’s this letter that says to do so…and all of that iffy stuff doesn’t work for a business owner,” said Pitts.

The vagueness of these rules has actually forced some food truck owners that live in the county to take their business elsewhere, like Kool Zone Food Truck owner Angela Coleman, who moved her truck from Woodbridge to Arlington.

“I was born and raised in Prince William County and I would like to do business there, but it just hasn’t been easy,” said Coleman.

VAStrEats was already in talks with the county’s zoning department prior to the rule being rescinded, but the future (and upcoming regulations) remain unclear for food trucks, as the county has not made any further moves.

“One thing we’re concerned about, and it’s not in writing yet, is that we’re still waiting for that letter from the [county] Zoning administrator rescinding the 90-minute determination, but we also wanted to know how that is going to affect food trucks in general, because there’s nothing in the ordinance for food trucks. One of the things we don’t want is for that confusion to continue,” said Pitts.

Pitts said that the board was open to working with food truck owners, and that they would be meeting together to talk about specific food truck regulations early this year.

And according to Prince William County Planning Office Director Christopher Price, changing the ordinance to reflect the food truck business would require public hearings, as changes would have to be made to the County Code itself.

“We hope to have some recommendations for the Board’s consideration early next year.  If the Board decides to initiate amendments to the County Code, this would go through the public hearing process,” said Price.