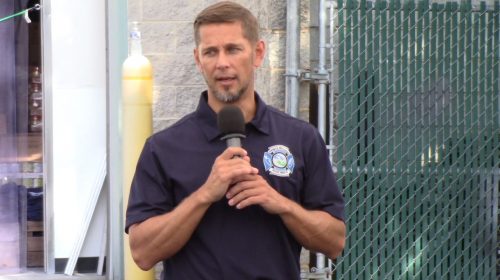 Not all heroes require capes. Some just need a cell phone and a vehicle.

Action in Community Through Service (ACTS), in partnership with 412 Food Rescue and Imagine, has launched a Prince William Food Rescue program.

Information about the it and the Dumfries non-profit was shared during a launch party that took place at the Hunger Prevention Center on Wednesday.

For the program, ACTS has created the “Prince William Food Rescue Hero” app, which connects businesses that have food available and those in need of food.

This opens the doors to those who don’t have the means to store or transport fresh food.

“It’s going to mean that food gets from donor — does not have to come to the warehouse first — but goes directly to people who need it,” CEO Steve Liga said. “That’s something that we’ve never been able to do before, and I think that’s just going to … change the way food is rescued in this county.”

Development Director Aaron Tolson explained that about 40 percent of food is wasted in the United States and one in six individuals are hungry.

“So, you have all of this really good, healthy food that just goes to landfill and there are people that are hungry that could actually use that food,” Tolson said.

The program stems from a social media post Tolson saw about 412 Food Rescue about a year ago.

Staff members have been piloting the program for the past few weeks.

More than 2,500 pounds of food was saved through 21 food rescues, according to Food Rescue Coordinator Claire Duncan.

“This is just the beginning, but we’re really excited for what we’ve already been able to accomplish,” Duncan said.