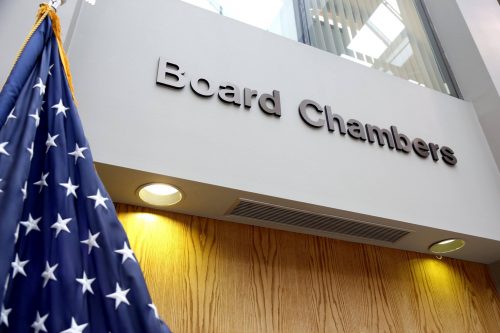 The Prince William County Board of Supervisors has adopted the county’s Five-Year Plan.

Every five years the county adopts a plan, which shows that they’re committed to certain projects and operations over the period of time.

“It is important to note that this is a five-year plan, not a five-year budget. Obviously, as the economic conditions and Board priorities change, the plan can be amended to address the new realities. Nothing is set in stone. The Five-Year Plan simply provides discipline and structure for the Board moving forward,” stated Budget Director Michelle Casciato in a release.

According to Chairman Corey Stewart, the county needs to move away from relying on residential real estate bill tax dollars to fund projects outlined in the Five-Year Plan.

“To manage county government effectively, we need to look at a broader picture and not simply on whether home assessments go up or down. This Five-Year Plan constrains government growth by capping operational expenditure growth so that it may not exceed 3.5 percent. Obviously, we will push to keep operational expenditure growth lower than 3.5 percent each year, but this provides sound guidance to staff so that we make certain we maintain continuity of business and limit growth of government,” stated Stewart in a release.

The following are capital projects that will be funded in the Five-Year plan, from a release:

$400,000 to expand the Flory Small Business Center and allow it to secure matching funding to build a new facility on county-owned land;

$1 million for the design and engineering to be used to provide scope and cost estimate for a new animal shelter;

$750,000 to build a maintenance building at Locust Shade to service all parks in Eastern Prince William County;

$332,000 to develop an enterprise system to allow staff to manage and to secure personnel files and other human resources documents;

$1 million to gather requirements and develop and evaluate an RFP for an enterprise solution for human capital management to replace failing human resources information system;

$600,000 to expand the scope of the Nokesville Fire Station reconstruction to include a community room.

Here are the funded one-time expenditures in the operating budget, from a release:

$748,000 to pay for additional election officers and purchase additional voting equipment and paper ballots for the 2016 presidential election;

$200,000 to hire a consultant to develop a methodology for the assessment of complex properties;

$200,000 to perform a mandated needs assessment for the 37-year-old Juvenile Detention Center in order to receive state funding for enlargement, renovation and construction;

$75,000 to support the Department of Economic Development’s “Next Generation Life Sciences and Information Technology Program,” which assists the growing entrepreneurial cluster in the life sciences and information technology sectors;

$75,000 for the PRTC Wheels to Wellness Program, which provides transportation for the elderly to medical appointments.

The Board also allocated $13 million to the county’s Capital Reserve Fund for future capital projects and one time expenditures.

Along with adopting the Five-Year Plan, the board voted to appropriate $14.5 million from year-end county savings to several projects.

“The monies were the result of savings following Fiscal 2015 that the Board requested to come forward during the Fiscal 2017 budget cycle for appropriation. The monies may only be used on one-time expenditures, such as building facilities, upgrading communications systems, replacing operating systems, upgrading parks and funding certain operating projects,” stated a release.