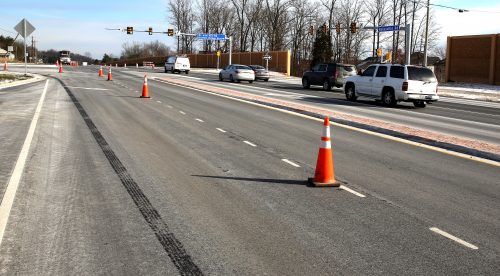 Phase I of the Route 28 project is complete, and the next phase will be beginning soon.

According to a release, the first section, which cost $42.2 million and widened parts of Route 28 and realigned Vint Hill Road, was opened up to traffic last week.

“The project, funded by federal, state and local money, included creating a new Vint Hill Road as a four-lane divided roadway that realigns the road to intersect at a new location on Route 28, across from Bristow Village Boulevard,” stated a release.

Phase I also widened Route 28 from Linton Hall Road to the new Vint Hill Road and included several road improvements such as traffic signs, sound walls, and utility relocation, according to a release.

“This was a complicated project that took, not just the county, but federal government and state government and private developers to get this done. Last year, the county alone completed 10 transportation projects totaling $148 million. Prince William County remains by far having the most aggressive road building program anywhere in the commonwealth of Virginia. We’re very, very, proud of that,” stated Prince William County Board of Supervisors Chairman Corey Stewart in a release.

“This road we’re opening today is part of a bigger network of projects that we’re working on. This is really an excellent example of partnerships, a partnership between Prince William County Government, who manages the project and helps provide and organize all the funding, a partnership with the Northern Virginia Transportation Authority, which provided another large injection of funds and a partnership with the private sector. A lot of this road was made with proffer funds and land donated as part of nearby development. So, it’s a great example of the notion that by working together we can accomplish a great deal more,” stated Supervisor Marty Nohe in a release.

The next phase of the project will include widening Route 28 from the new Vint Hill Road to Fitzwater Drive, which is expected to begin this spring and be completed in 2019.