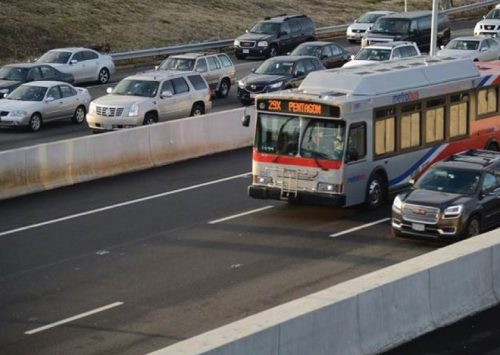 Yesterday, Virginia Governor Terry McAuliffe announced that an extension is coming for the I-395 Express Lanes.

According to a release, the Commonwealth accepted a proposal from Transurban to expand the lanes.

The project will extend the lanes for eight miles north, from Turkeycock Run to Eads Street in Arlington, stated a release.

“The two existing HOV lanes (or High Occupancy Toll) lanes will be converted to express lanes and a third lane will be added, providing three reversible express lanes. The improvements primarily will be built within the existing footprint of the I-395 HOV lanes,” stated a release.

“Today thousands of area businesses cheered the approval of the 395 Express Lanes project and the congestion relief that the this much-needed extension will provide. Further, construction of the project will create hundreds of local jobs and offer opportunities for small, women- and minority-owned businesses. To remain competitive, Northern Virginia requires a modern highway infrastructure network and the 395 Express Lanes supports this vision by providing travellers and businesses with choice, quicker travel and reliability,” stated Prince William Chamber of Commerce President and CEO Debbie Jones in a release.

Construction is set to begin this year, with an expected completion date of 2019.