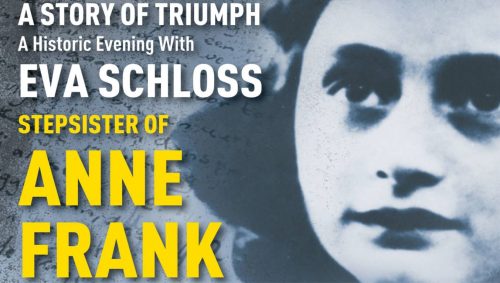 Anne Frank’s stepsister to speak in Northern Virginia on Feb. 7

History will be recalled at George Mason University Center For The Arts next week.

Eva Schloss, Anne Frank’s friend and stepsister, will share a few of their childhood memories on February 7, according to a release.

In 1938, when Schloss — then Eva Geiringer — was 8 years old, Germany invaded Austria. Her family moved to Holland, where she lived next door to Anne Frank.

The two friends and their families were eventually sent to the Auschwitz concentration camp. Frank, who later became Schloss’ sister, didn’t survive.

After surviving Auschwitz, Schloss moved to England where she married Zvi Schloss. In addition to raising three daughters, she ran an antique shop and did studio photography.

For the past 33 years, Schloss has educated many about the holocaust.

The Chabad of Greater Gainesville & Manassas is a sponsor of the event, which begins at 6:30 p.m.