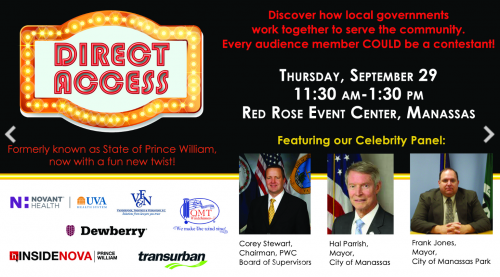 Area elected officials came together in Manassas to take part in Direct Access, hosted by the Prince William Chamber of Commerce.

According to a release, “Direct Access (formerly known as State of Prince William), offers you the chance to ask questions of top local elected officials in a fun new format…Audience members will have the chance to trade questions with our celebrity panelists AND gain insight into how the business community can work side-by-side with local governments to improve our economic climate, grow their businesses and enhance the local quality of life.”

Several business leaders spoke with the panel about their businesses, and what can be done to improve economic growth in Prince William County.

“For a region to be an economic success, it must be connected with the world’s markets. Years ago, that was through ports located along the coast and rivers. Today it is airports that connect Prince William citizens and businesses to the nation and the world’s markets,” said one business leader in the aviation industry, asking about what elected officials will do now that the county has removed the Bi-County Parkway from their Comprehensive Plan.

Stewart was adamant that the potential for the Bi-County Parkway to come to fruition was very real.

“Don’t think that the road…the Bi-County Parkway is dead. It is not. What the board did was a big mistake, but it was not essentially the blow that killed it,” said Stewart.

During the Direct Access discussion on road access, Jones brought up the challenges that the congestion on Route 28 poses for the area.

“Until such time as we solve the problems with Route 28 – from Northern Prince William County to support Manassas and Manassas Park, all the way up to the Dulles Access Corridor and Dulles Airport, we’re going to hamstring ourselves in terms of our future business opportunities,” said Jones.

Stewart frequently asked what the county could do to improve, and to make it better for area businesses, which was met with a variety of suggestions.

“We need to do a better job of promoting economic growth in the region, and I think we would all benefit from that,” said Stewart.

“Manassas has been known for its festivals and events…this past weekend we just had the Latino Festival, this coming weekend…I invite you to the Fall Jubilee. We have many, many festivals and events…and within Manassas, food trucks have always been available and used at our events and our festivals,” said Parrish.

To see more of the Direct Access event, watch the video below.