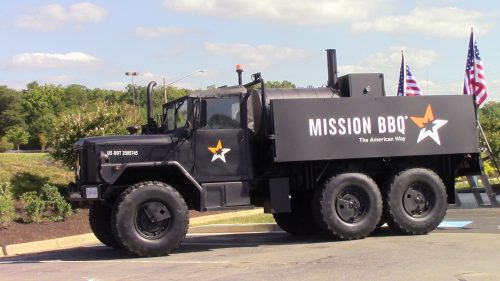 The 54th Mission BBQ location opened up its doors today in Woodbridge.

The entire Mission BBQ team was on site for the grand opening and ribbon cutting, started off by a rendition of the National Anthem by “America’s Got Talent” contestant and Stafford County sheriff’s deputy Deuntay Diggs.

The restaurant is located at 13890 Shoppers Best Way, just up the road from Potomac Mills Mall.

The Mission BBQ founders were present, and offered some insight on the chain’s history and mission.

“We wanted to build a business that had purpose, that had meaning, that had significance, and so we opened our first Mission BBQ,” said founder Bill Kraus.

The chain was started on September 11, 2011, and according to Kraus, that opening date was intentional.

“Damn right, we did that intentionally,” said Kraus, continuing, “We just very simply define a hero at Mission BBQ as anybody that’ll raise their right hand and swear to protect, serve, and save the rest of us. If you do it in our communities, or you put on the cloth of our nation, and you go fight to keep us free and to keep us safe.”

If you’re looking for a place to pick up a pulled pork sandwich, a side of brisket, or the famous “Maggie’s Mac-N-Cheese” then consider stopping by.

According to Mission BBQ Woodbridge’s Director of Operations David Cobb, all of the food is cooked on site and made from scratch.

Read more about their menu here.

The company has a goal to open 80 restaurants along the East Coast by the end of 2018.