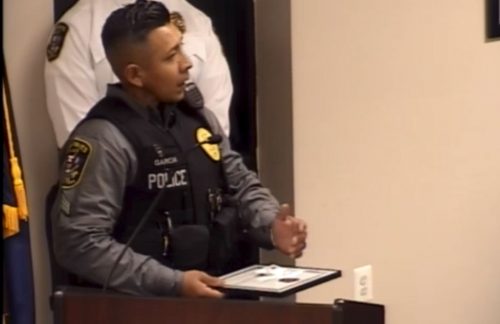 The efforts of one Dumfries Police Department employee have helped save a life.

His actions were recognized on Tuesday at a Dumfries Town Council meeting, where he received a Lifesaving Award.

“For me, it’s just doing what I love, doing my job, and I was just thankful that I was able to help him out during those hard times,” Garcia told What’s Up Prince William.

The incident began when Garcia was dispatched to the Triangle Shopping Plaza.

When he arrived, a juvenile was standing on top of a building, threatening to jump, Police Chief Nicholas Esposito said at the Town Council meeting.

In the meantime, Garcia was focused on getting the youth to the ground safely,

“At that point, he’s up there, I don’t know if he’s got any weapons, or anything like that,” Garcia said. “And he’s bleeding from the arm, so I think the first thing I wanted [was] to get him to come down, that way we could seek the medical attention that he needed for the laceration on his arm.”

The juvenile refused to come down and wrapped a chord that was attached to a banister around his neck, according to Garcia.

Garcia began talking with the male, who he had seen before while on previous patrols. The sargeant eventually convinced youth to remove the chord from his neck and come down to the ground, where he received medical attention.

“I listened to the dispatch for the whole event. You could hear a little bit of stress in Sgt. Garcia’s voice during the encounter, but … I don’t feel like he ever lost composer. I feel like he knew what his job was, his responsibility,” Esposito said. “He outperformed better than I would have expected from him.”

Even though the juvenile was safe, Garcia continued to talk with him and contacted the youth’s mom to inform her of the situation.

He also rode with the juvenile, who was transported to a local hospital.