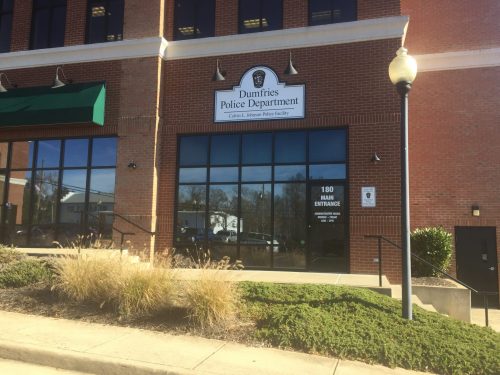 The Town of Dumfries Police Department has a new home.

The department has undergone a series of changes in the past year, and newly-instated Chief Nicholas Esposito helped the Dumfries police move their offices to 17739 Main Street.

“I took over as Police Chief April 1, and the best thing about it was were kind of building from the ground up and trying to get everything going again,” said Esposito.

The change came after a Dumfries Town Council vote to move the station closer to Town Hall and other municipal government buildings.

The department officially moved in June, said Esposito, and so far the feedback on the new space has been positive.

Along with its distance from Town Hall, the former location had its own set of challenges.

“It was an older building – I think at one point it used to be an old bank, so a lot of the structure in there was old…and we kept having to kind of trek down to Town Hall to get things done or to do paperwork, so being over here and being able to just walk across the parking lot is just so much better,” said Esposito.

Dumfries officers are now able to do training in-house versus traveling elsewhere.

“We’re with Rappahannock Criminal Justice Academy, and they’ve certified us to do in-house training here, so that’s going to alleviate us having to leave town or anything to do training. We can do everything here in-house,” said Esposito.