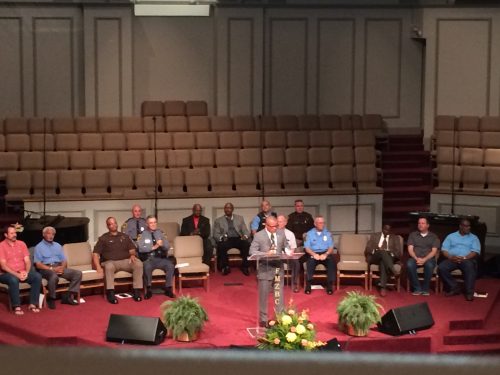 Hundreds gather in Dumfries for discussion on community, law enforcement

300 people filled First Mount Zion Baptist Church for the “Clergy and Law Enforcement in a Community Dialogue” meeting, which was hosted by pastor of the church and Delegate Luke Torian.

When asked what would be most impactful to improve community and law enforcement relationships Chief Deputy Terry Fearnley stated, “Community involvement, outreach programs like what we are doing tonight.”

During the meeting, participants spoke about trust, connecting with young people, what to do when stopped by police, body cameras, de-escalation training, and hiring measures taken by law enforcement.

According to Sandra McLean, a black Prince William resident and member of the Prince William County Soil and Water Board, it was important to take part in the meeting for her role as a community activist and mother.

Janel Withers, a Prince William resident and mother of two young sons came to the event to “find out what is going on in the community, see what is in place because of certain events that are happening in the nation.”

Torian has hosted similar community meetings in the past, but remarked the turnout for last night’s meeting was far more than previous meetings.

If you would like to voice your concerns about the relationship between the community and law enforcement contact Barnard at bbarnard@pwcgov.org or Sheriff’s Deputy Terry Fearnley at tfearnley@pwcgov.org.