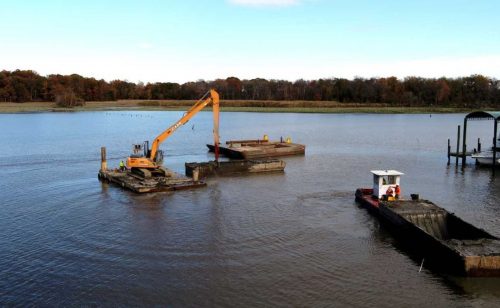 Safety is about to improve at a local waterway.

Dredging has begun on Neabsco Creek, which is located near Leesylvania State Park in Woodbridge.

The work aims to address the channel’s silting issue.

Throughout the years, development has caused the waterway to become blocked with soil.

Stakeholders met with the Coast Guard, requesting it reconsider the decision.

Meeting attendees also asked the United States Army Corps of Engineers to do a study of the federal channel, which was found to be less than 4 feet in certain areas, according to a release from the county.

For boats to safely pass through, more than 50 million pounds of soil must be cleared from Neabsco Creek.

The Army Corps of Engineers is responsible for maintaining the waterway, but it has been unable to complete the needed work due to lack of funding.

The Board of County Supervisors (BOCS) has agreed to provide $750,000 to the project. The grant will be managed by the county’s Industrial Development Authority (IDA).

In July, owners of the marina established the Neabsco Creek, LLC, which hired a contractor that will perform the dredging.

To receive funding from the county, Neabsco Creek, LLC should gain the correct permits.

Dredging must be completed by January 31.