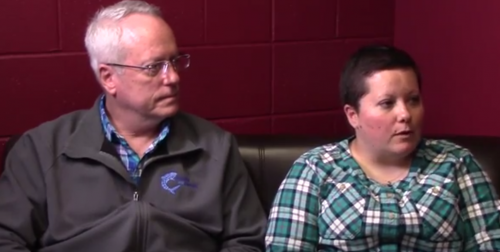 For this week’s Community Conversations, we spoke with Jill Hottel and Scott Vadnais from Diving with Heroes, a local non-profit in Haymarket that works with injured and disabled service members and veterans in the area.

Q: Tell me about your organization.

JH: So Diving with Heroes was started in 2014 as an organization to give back to our nation’s injured veterans and service members. So a lot of these people, as they’ve served in duty – whether in the war zone or here at home – they’ve been injured in their line of duty. And so as they are rehabilitating, they are offered opportunities to participate in programs, and one of those is scuba diving.

So sometimes they’ll just do a – try scuba, sometimes they’ll get certified. But when they graduate from their rehab programs or they graduate from the hospital, often times they stop scuba diving. So we wanted to give them an opportunity to continue with their scuba diving and make it a lifestyle choice. We take people on trips and also do local programs around the area, and we just want to get them in the water really. Give them that opportunity to continue rehabbing with scuba, and also building a lifestyle around it, so that they have something to look forward to and participate in, and eventually get their family and friends involved with them.

We find that scuba diving is really helpful for injured veterans and service members in particular, because of the weightlessness that they experience when they’re underwater. And also the quietness. People with PTSD – post-traumatic stress disorder – they really like being able to escape from all the noises and all of the everyday things that really just make their brain go crazy. So underwater it’s quiet down there, there’s nothing going on. You can just kind of hang out and enjoy. And that’s where we’re trying to give back, just that feeling of weightless freedom.

Q: Who do you partner with locally?

JH: Locally we’ve partnered with Patriot Scuba in Occoquan. Also their organization Patriot for Disabled Divers. And they’ve done a lot of work in building relationships in the local hospitals – military hospitals. And working with these veterans and getting them in the water, whether through scuba, discover scuba, or open water certifications. And we’ll take those graduates from their program and bring them into our program. So we’ve really partnered up and found that we’re working well as a continuation of the work that they’re doing. So they get them in the water and then we keep them in the water.

Q: How have you seen this program help in that way?

SV: Well it’s helped in a number of ways. Folks who, as Jill mentioned, the weightlessness – people who have some severe back injuries, amputees – that being able to be in the water is the first time they are pain free during the course of months, sometimes, and that’s been very therapeutic. People like – Jill mentioned PTSD – and traumatic brain injury, it’s all of the stimuli going on and when you’re in the water all you’re trying to do is balance and float. It’s very calming, very soothing for those folks in particular.

On one of our first trips a guy named Mike – he’s very quiet – who has PTSD quite severely as well as some physical injuries as well. Very quiet, very hard to get to know, very closed off, and he went through the program that Jill mentioned and he came to us about a week after he got certified and we ended up going down on one of our international trips. And the first time he came up out of the water, he rips his face mask off and is like “Oh my gosh, I’ve never seen anything like that. It’s a completely different world under there. And the rest of the world is just talk, talk, talk – jab, jab.” It just brought him right out of his shell.

And he got home and now he and his two teenage boys go on trips, his wife started diving as well. So it’s become a family activity that’s brought them all closer together. And it’s helped break down some of the communication barriers from his service, from his PTSD that directly related to his time in the water. And he made those advances. That’s just one story, there’s several others. We haven’t been around long enough to have hundreds of stories, but it’s been very helpful, very therapeutic, especially rewarding for those of us who are involved, to see real, tangible improvements and changes in people.

Q: On your website you have a documentary that was made. Just tell me a little bit about what the documentary’s about and what people can see.

JH: So the documentary is about three service members who were injured during their time in Iraq. All three of them served in Iraq, doing the same work, doing transport and security. They all suffered from PTSD among other physical ailments. And so we follow them as they become open water scuba divers and then as they go on their first open water dive in the ocean. So it’s just really about our mission and the work that we’re doing, but watching the transformation among these three.

And I think, I think it’s a great film personally, but it’s also fun to see the transformation. They really open up, just throughout the film and just talking about the experiences that they’re having and also just the joy that they’re experiencing by being in the water.

Q: You mentioned earlier that after you made the documentary, and started having some people come through the program, that you now added to the program the Marine Science Initiative. So tell me how that falls into your program.

JH: Through filming the documentary we noticed that two things are lacking in their lives: the brotherhood and the mission. So the brotherhood being that they’re all of a sudden out of the service where they were serving amongst their units, their teams, and the mission – they no longer feel that sense of purpose. They don’t have something driving them. They’re not seeking to accomplish something. So we thought of the Marine Science Initiative as a good way to get them engaged and continue their adventures underwater.

So we’re looking at ocean conservation, what can they do to engage the ocean and help protect it, as you know a mission overall. So we started going on trips with the Central Caribbean Marine Institute down in Little Cayman and we go down to their research station and participate in whatever the researchers are engaged in at the time. So we went last year. We worked on lionfish studies, particularly we participated in some lionfish culls. We also worked in their coral nursery and we helped them do some cleaning and also some general maintenance.

We got to study sharks, shark behavior in the Cayman Islands. And really just worked around the station, whatever they needed help with – repairing a generator, participating in kitchen cleanup and cooking. And it gave them a sense of brotherhood because we split them up into teams and they worked with their units throughout the week. And also that mission. So they now they have a broader sense of the ocean and they want to be pretty much advocates or ambassadors for the ocean and they want to participate in conservation.

SV: This is a mission that, as Jill mentioned, really came out of one of the dives where we were cleaning little pieces of coral – they’re the little pieces of coral – because some of the coral is dying down there, so they have this coral nursery with PVC pipes with little pieces of coral. And it has to be cleaned every couple of weeks. Sediment hits on it and can inhibit the growth. And we briefed a dive – we were going to go down for 45 minutes, we were gonna clean with a toothbrush – we’re gonna clean these pieces for 45 minutes. And when it came to 45 minutes, time to go up, the guys were like “I’ve got air, I’ve got to stay here, I’m not done yet. And I haven’t completed the mission.” And they kept on going. So we spent another 10 minutes or so cause there’s no danger – we had enough air – we weren’t down that deep. But since it was a mission they weren’t ready to give up, they weren’t leaving until the mission was done. So when they came up we asked them “Why did you want to stay longer?” – “I wasn’t done. I hadn’t completed my mission.”

Q: So on your website, people can go there to help donate to your organization or to help them get some more information. Anything else that’s coming up as far as events or something that you need help with?

JH: Well we have our big trip to the research station in June, so we’ll be preparing for that, come the beginning of the year. We’ll also be doing a couple local programs – we like to go to the National Aquarium to participate in their diver program – where we actually get to dive in the fish tanks. It’s a lot of fun, especially when there’s still guests in the aquarium. We get to wave to them. And then we’ll be doing our local Dive Days at the Millbrook Quarry in Haymarket. So we partner with Coral Edge Adventures in Catharpin and we access the quarry and just have a Dive Day.

Everyone comes out and it’s just a fun day of diving and hanging out. So on our website there’s more information, pictures from previous trips, and also a button to donate. So donations are always accepted and definitely needed to help fund our mission of getting these guys back in the water.

Check back for the next episode of Community Conversations.