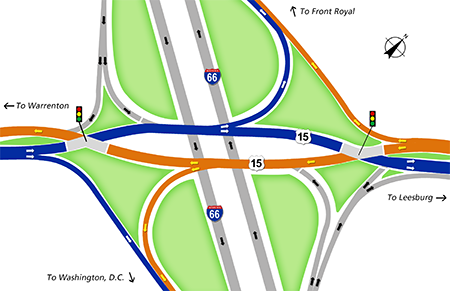 The $36 million Diverging Diamond Interchange (DDI) at I-66 and Route 15 in Haymarket had its opening delayed again to 9 a.m. on January 14.

“The DDI’s innovative design shifts vehicles to the opposite side of the road and eliminates left turns that cross oncoming traffic. Two-phase traffic signals at each end of the interchange reduce time spent at red lights and move twice the number of vehicles as a traditional diamond interchange,” stated the Virginia Department of Transportation (VDOT).

According to VDOT, while the construction on the project will be ongoing through the summer, the DDI will be open for drivers to use.

“VDOT recently completed its first two DDIs in Louisa and Roanoke, and has two more in the works in Blacksburg and Stafford,” stated a release.