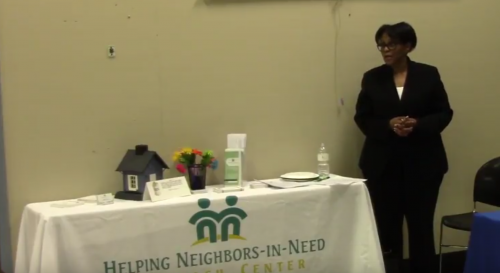 Reverend Madlin Edmonds, the head of the organization, spoke to the group about the organization’s mission, and the work they do to help Prince William’s homeless population.

According to the Metropolitan Washington Council of Governments, there are 400 individuals classified as homeless in the county, many of which are children.

“If you hear their stories, you would almost have to wonder how they survived, and how they have their sound mind. I think if we experienced some of the things that they have experience, which is rape and molestation, and running from domestic violence, and some of these other things – we have to stop and think about where we’d be, if we were in similar situations,” said Edmonds.

The organization goes out into the homeless camps, and looks for individuals that need assistance.

“What we have decided to do is to go and find [people] – not just wait for them to come to us – but to go and find those that are homeless,” said Edmonds.

Helping Neighbors-in-Need is comprised of all volunteer staff, and has four case managers and office administrators.

According to Edmonds, the organization provides a year long term of assistance, in the areas of housing, health, and employment.

“Can you imagine having cancer, in the woods? And having to take your chemotherapy and then go back to the woods,” said Edmonds.