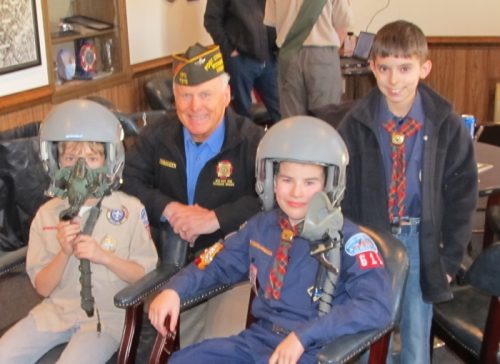 Cub Scouts from Pack 611 in Lake Ridge visited the Occoquan Veterans of Foreign Wars (VFW) Post 7916 as part of their “Build My Own Hero” project.

More on the visit, from a release:

Scout Den Leaders thought one place to find real “heroes” is from the Veterans of Foreign Wars. One of the requirements of their project is that they: “Discover what it means to be a hero and invite a local hero to meet with your Den.”

VFW Post 7916 Commander Chuck Wilson welcomed the scouts and provided both a verbal and video presentation of flying the U-2 “Spy Plane.” Post Quartermaster and Life Member James Adams spoke on how to load and fire the Abrams tank 105 mm gun with scouts participating, Life Member Jim Radigen spoke on flying the Navy C-130 over the Antarctic, Life Member Karen Jefferies spoke on “driving” a Navy ship off of the treacherous waters near the Golden Gate Bridge, and Life Member Kerry Kachejian spoke to them about rebuilding Iraq during a raging insurgency. Kachejian is the author of “SUVs SUCK in Combat: The Rebuilding of Iraq during a Raging Insurgency,” and each scout was provided a signed copy of his book. Additionally, Life Member Mike Niblack came is his Navy Dress Master Chief uniform and conversed with the scouts about Navy nuclear submarines. They also learned about the path to Eagle Scout.

Following the “show and tell” presentations several of the scouts were given the opportunity to put on Wilson’s personal USAF Jet Pilot helmets, and pictures were taken.