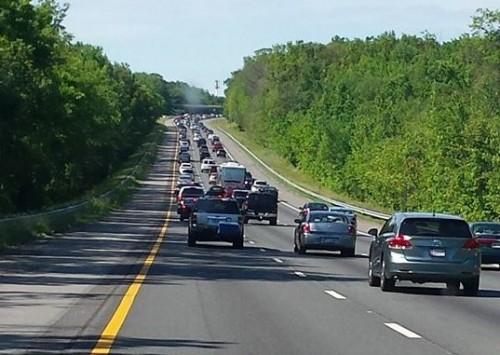 The construction project to extend the I-95 Express Lanes for 2.5 miles in Stafford County has begun.

According to a release, the $31.1 million project is being completed as a measure to reduce congestion and delays for drivers near the current Express Lanes endpoint, near Rt. 610 – Garrisonville Road.

In addition to the road extension, the Virginia Department of Transportation (VDOT) will be working with Transurban to add some improvements where the Express Lanes merge with I-95, according to a release.

More on the planned improvements, from a release:

Southbound Express Lanes traffic heading to the Fredericksburg area and south will be able to continue past Garrisonville and merge about one mile south of Garrisonville Road.

More on what drivers can expect during construction, from a release:

Most construction will occur in the median of I-95 and within existing right-of-way. New tolling and regulatory signs will be installed along the northbound lanes of I-95, south of Garrisonville Road.

Early construction is beginning in permitted areas, including the installation of temporary concrete barriers along the north- and southbound left shoulders of I-95, and tree clearing in the median. Drivers should expect reduced inside shoulders in both directions on I-95, and should stay alert for slow-moving construction vehicles entering and exiting the travel lanes.

The southbound ramp for the project is set to be completed by early 2018, and the northbound ramp is set for completion by summer 2018, stated a release.