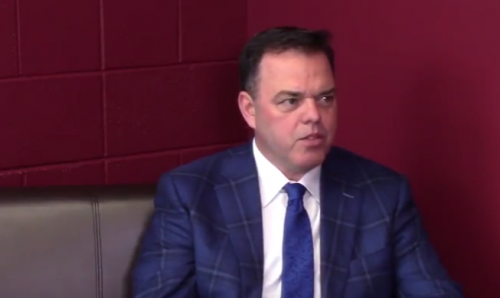 Community Conversations: The story of goldsmith Terry Quinn, and how he gives back to his community

This week on Community Conversations, our host ST Billingsley spoke with Terry Quinn, the owner of Quinn’s Goldsmith in Woodbridge and Occoquan.

Q: So, how long have you had a business here in Prince William County?

A: This August it’ll be 26 years. I started in Occoquan. And after about five years in Occoquan we moved right to the center of town, on the corner of Union Street, and we’ve been there ever since. I actually bought the building – it’s a four story building – I lived up there for a long time, and then I expanded the store all the way up, and moved out.

So after we outgrew that area, we opened the second store, which is right up the road over here in Stonebridge, between Jos. A Bank and Wegmans – right in the middle there.

Q: So, how did you get started actually, not only, being a jeweler, but actually designing and making different pieces?

A: Well, I started when I was a kid. I have eight brothers and sisters, and we didn’t have any money, and I wanted a ten-speed bike. And Dad said, ‘Great, get a job.’ I was in fourth grade, and I got a paper route. On my paper route, there was a small goldsmith. I’d pick up my papers, go around the corner, and go up the street a little bit, and it was Peter Small’s Goldsmith Shop. And I started to watch him make things out of the window, and then I started going in and talking to him. I talked him into buying a paper, and at one point, at Christmastime he melted an ingot of gold and he flattened it like a dime – a little pancake – and he gave it to me for my Christmas bonus.

And I was in fourth grade, and I had my own piece of gold, and I think that was the inspiration to – wow this is cool – and for some reason. Well the next thing was that my dad made rosary beads for the church. And he would watch football and make rosary beads. And then when I got older, freshman year of high school, they started a jewelry making school class. And I stayed in that class all four years, became a student teacher and got out, joined the military, moved down here in the Air Force. I was an Honor Guard for President Reagan at the White House. We got done every day at 3 o’clock. So I got a goldsmith apprentice job at Springfield Mall in the 1980s.

Q: You’ve recently won some awards. What kind of awards have you received?

A: Over the past 25 years, I’ve gone to taking all different kinds of art. I’ve taken gun engraving, wood engraving, stone engraving at the Copeland School of Art. Also sculpting – I decided if I could make a ring, I could sculpt something bigger – I sculpted my children. I’ve got life sized sculptures of kids at my store which is very neat. So I decided to start entering my pieces in competitions, instead of just making them for people. And over the last three years we’ve won nine competitions, five of them were first place in the United States. The last one was in March, just this past year.

Q: So what sets your store apart from say, a mall jewelry store?

A: Well, most jewelry stores are merchants. They buy and sell merchandise. They pick up the phone and get in what you need, or they have it in inventory. We’re a goldsmith. I have five goldsmiths on staff. I’m a goldsmith myself. I was up at 7 this morning making a ring at my house – and making a pendant at my house. But the point is, it’s like a good book, you don’t want to put it down.

So when they just order things, we actually make things. We also sell things that are inventory pieces but we can fix things, create things, melt your mother’s old rings down, or grandmother who’s passed them on to you, and make anything you want. So that’s definitely a big difference.

A: I think the biggest challenge is – in Occoquan it’s been traffic flow, just because the parking is a little more difficult. We’re definitely a destination store. Most people that come in, they’re coming in for a reason, whether it’s a purchase or a repair. Up here at Stonebridge we’re a lot closer to Wegmans so it’s easier and more convenient to stop in. But definitely the challenges [are] everything; from the economy, I think there’s less disposable income.

So we’ve done some fun things where we’ll do – you know, you sign up for our website, and be on our website and we’ll do $50 off of a repair, even if it makes it free, just to help people that want something or need it fixed, and they can’t afford it right now. So we try to do that a couple times a year. So it’s different challenges all the time – cash flow. You know, everything else. For the most part I’m happy.

Many years ago, we lost our first child at birth. And I couldn’t help her, so I decided to try to help children. And the Make a Wish, to me – making someone happy – can sometimes be the best medicine of all. We’ve raised over $250,000 for the Make a Wish Foundation in a 10 year period. After 10 years – we used to get donations from our vendors – and after 10 years, I think the donations kind of dwindled down because they were giving and giving and giving, and you can’t ask everybody to give forever. But I’m still involved in the community 100%.

Q: With the other organizations, like Rotary and other community organizations, how important is that, do you think, to be involved as a business owner with the community?

A: I think it’s important to me – I sleep well. Everybody – there’s a lot of organizations that all have needs, and we do our best to help everyone out as best we can. But, hands on, last weekend was road cleanup. So if you passed [by] me I was wearing a vest and picking up trash on the road, and that was with our group of Rotarians, and giving back to the community. We’re raising money to help ACTS for the families in our area. To me, those kind of things that we can do to help people that need it, that’s the – it’s very self-rewarding.