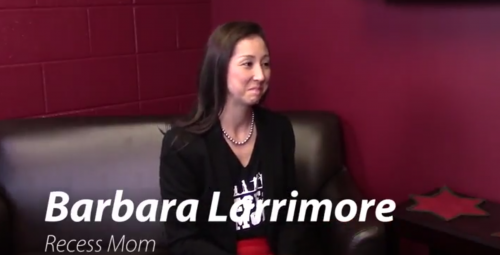 We spoke with “Recess Mom” Barbara Larrimore for this episode of Community Conversations.

Q: So tell me how all this Recess Mom got started.

A: I noticed when my son David came home from kindergarten, that he would come home with holes bitten into his collars and sleeves, and I couldn’t put it all together for a couple of years, actually. And then looking at schedules in Fairfax County and in Arlington County of my friends – seeing that they actually do get a lot more physical activity in their day, in terms of PE classes and recess time.

Q: Why is it important for the kids to have more recess? How much recess are they getting now, compared to what they need?

A: Well, the American Academy of Pediatrics states that children should have 60 minutes of vigorous activity every day. And the children in Prince William County spend about half their waking hours in school. So if you’re just going by that metric, they should be spending 30 minutes a day of physical activity at school, while they’re there, and possibly another 30 minutes at home.

That’s what I’m asking for – it’s kind of that bare minimum going off of the standard of the American Academy of Pediatrics. Right now they’re getting 15 minutes of recess, and that’s their sole form of physical activity on the days that they’re not getting PE. And they have PE once a week one week, and then twice a week the next week. And that’s the schedule that they have at Lake Ridge [Elementary]. Some have a little bit more progressive policies, and some schools they have twice a week, and then some have less. We’re kind of at the bottom, but that’s still not very much.

Q: What have you been doing to spread the word about this issue?

A: I’ve been doing a lot of social media. I’ve started my “More Recess in PWC” Facebook page, on my own personal Facebook page, I just hosted a pep rally at the school board meeting. I’ve gone to as many school board meetings as I can, since I started this over the last six months, and I recently had a Town Hall meeting in Lake Ridge, to try to get more of the people who are most affected by this at Lake Ridge Elementary School, to know.

Q: Tell us a little bit more about the Town Hall that you had. What was the reaction of people, with that?

A: There was a great reaction from the community in terms of asking good questions to the [School Board] Chairman. They were active, they were getting to know the issues better. Not just about PE and recess, but about the reasons why we don’t have more PE and recess, which is instructional hours, and just constraints with the budget, and things like that. So just getting to know how to advocate for things is so important, but getting the information, so I was hoping to get the people at Lake Ridge to know more about these kinds of issues and where we can start, and how we can advocate more for our kids.

A: People are very willing to have a nice conversation. Everybody from the school board, to the people in the legislature, down to the principals and teachers. Everybody’s willing to have the conversation, but nobody is willing to kind of take that next step and say ‘This is what we’re going to do. And we’re gonna find these creative solutions to work around instructional minutes, and finances, and things like that.’

I get a lot of people who say ‘I agree with you – this is the right thing to do, 100%.’ But there’s always a ‘but’. So that’s kind of what I’m working with and what I’m learning now – is how to overcome barriers, to try to make this realistic and happen for Prince William County. Because the list of 100 top rated elementary schools in Virginia came out, and we were not on it – not even one. And there was Fairfax, Arlington, Fairfax, Arlington, Fairfax, Arlington, and that’s not the way I think we should be. I think our caliber of teacher, our caliber of student is no less here than we have in Fairfax and Arlington. So what do we need to do to get us up? And I really believe that recess and PE are a fundamental way to start getting children what they need – their basic needs met first.

Q: Is there anything else that you are having to work with, or anybody that you’ve run into – some other particular barriers, other than just the ‘but’ part?
A: Right now I’m trying to get some legislation together, so hopefully next January when whoever is in office goes there, will be able to put something down and put a House bill out there. And just writing that, and kind of figuring out how to do that and make that happen. So I’ve just been contacting teachers, and principals, and school board officials, and school board members to try to help me get those pieces together, so we can actually put this in motion in a very real way.