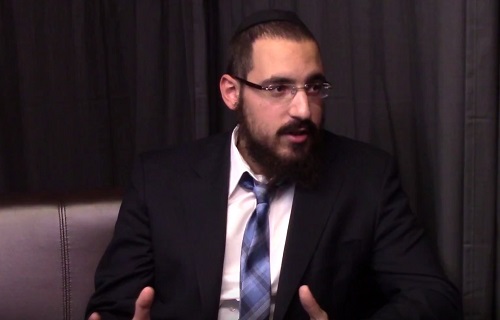 For this episode of Community Conversations, we spoke with Rabbi Shmuel Perlstein, who recently started the Chabad of Greater Gainesville & Manassas.

Q: So you’re opening the first Jewish community center in the area. Please tell us – what’s going to be going on there?

A: So it’s actually a pretty exciting opportunity for us. Northern Virginia in general is having a lot of growth and quite a bit of establishment. And there’s a lot of Jewish centers throughout the area – there’s actually a Jewish center out more in the eastern end of Prince William County. And we’re a part of the network here in Northern Virginia, we’re the seventh Chabad rabbi center in the Northern Virginia area. And there hasn’t been really any local services really being provided, or a center established in the Gainesville area.

At first, the JCC of Fairfax – we’ve been doing activities out here and they’ve been very helpful with us, participating with us in some of our events in the area. And we’ve seen a great outpouring of interest and support from locals to have something that they don’t have to travel as far, and they don’t have to feel like they’re, you know, going and traveling to another community. And they have something local that they can feel that they’re a part of. So that’s been exciting for us to be able to make this dream a reality for the people in the Gainesville area.

Q: So, tell us about your background.

A: I’m actually originally from Chicago. My wife Goldie is from New York. We both grew up in Chabad families, in Jewish communities. Our families are pretty much both – all our siblings – have taken on this mission of being a part of this great thing which Chabad does, which is going to communities throughout the States and throughout the world, and providing that every single Jew has a place that they can interact with their Judaism. I think in a way, Chabad believes that there’s no Jew that’s unimportant and there’s no good deed that’s insignificant. And that’s really what we try doing wherever we go – is to make every Jew understand that they’re welcome, no matter what background, what knowledge or base, or wherever they’re at – and we value a Jew. Every Jew is as Jewish as Moses was, and every deed is important to God no matter where you’re at in your life.

So I think that having that background of the family support, which has all been involved in this mission, and being a part of this Chabad which has this mission – and there’s actually about 4,000 Chabad rabbis throughout the world in centers, which do a similar type of work. And we actually spent the last year and a half in Tennessee, in Knoxville with my sister – [she] has a Chabad center and a Jewish school out there – and we’ve kind of gotten a little bit of experience and we’ve had this opportunity now to move to the area, and that’s a special opportunity. And it’s unique, the fact that we’re being the first to be able to offer services locally. And it’s a growing area, and the welcoming that we’ve had from people here is really what pulled us to come to the area.

Q: What kind of events and activities will take place there?

A: So, right now actually we don’t have a physical center just yet. God willing, we’ll be back here in a year or so from now, or maybe who knows when, to talk about plans for a center. But right now it’s a lot of services in people’s homes or clubhouses, or stuff like that. It is very new. Every Chabad center operates and is funded locally, so we’re going to build based off of the support and the resources that we’re gonna have long-term. But we actually have coming up New Year’s – we’re going to be having a Shofar service, as well as a holiday buffet with many treats, a lot of delicious holiday treats. We’re going to be having a [sic] festival a celebration in our Sukkot. And also some activities for kids over there.

We’re gonna have classes – evening classes – and then we’re actually going to be having a more or less weekly class at The Tribute near Heritage Hunt. And we’re going to be offering like a ‘Mommy and Me’ program for moms with little kids, as well as for the upcoming days like Hanukah, and Passover, and so on and so forth. Just making sure that when the holidays come about, people can celebrate them. We may have some Friday night dinners and so on and so forth – anything which can help build a community, and bring people together, and giving people opportunities.

Q: So tell me about the Jewish community in Prince William County.

A: So it’s actually been interesting. What we found from the bit of time that we’ve been here is – actually we spent the past year visiting the area, and doing some events here and there – is that there’s a nice mix of the community. There’s a nice 55+ community and as well there’s also a lot of young families, which are moving to the area, looking for their first homes, and so on and so forth. And we hope to be able to cater to both of that crowd, and have events which are catered and geared to more the 55+ communities as well as to families with kids. We actually just had a Challah Bake for Rosh Hashanah to make the challah, which is the bread that is traditional to eat on holidays and Shabbat. And it was a beautiful evening, and as well, some of the classes that we’re going to be offering and the events that we cater specifically to the older crowd, in addition to the many activities that we may be offering toward families.

Q: So you have programs for all different age groups, but is there a way that you actually bring them all together?

A: So actually yeah, there’s – it’s not as [split] as it may sound – a lot of the things are open for both, and especially like we had just this past year we weren’t here yet, we were still just visiting, we had a menorah lighting at the [Virginia] Gateway, and we had a beautiful crowd and turnout. And you had people there from all ages and it had a beautiful sense of community. And we would love to have that happen as well – it’s a beautiful thing for both age groups to be able to interact with the other and feel a part of that larger community and see that growth, that community there is in the Gainesville area.

Q: How can people actually get involved with your organization?

A: So the easiest would be is to – we have a website. Contact us, reach out to us and participate, join. And also the main thing – where we’re at it is help getting the word out. If you meet a fellow Jew, if you meet someone, let them know that they have a place they can call home here in the Gainesville area. And over time we hope to continue to be able to build, and provide, and grow together as a community – to be able to service each other better.

Check back for future episodes of Community Conversations.