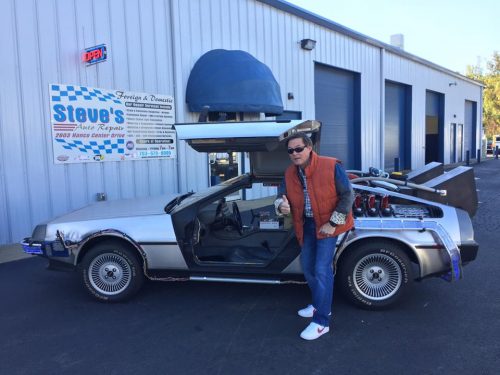 Community Conversations: ‘Back to the Future’ Time Machine visits in Woodbridge

For this episode of Community Conversations, our host ST Billingsley spoke with Ken Smith about his homemade ‘Back to the Future’ DeLorean Time Machine.

Q: Tell me a little bit about your car.
A: Well, it is a 1981 DeLorean. It didn’t come this way. I figured for my 50th birthday what I’d want was a Time Machine. So I asked my wife if we could buy a DeLorean, and I told her what we were going to do and she said ‘That’s the craziest thing I’ve ever heard.’ But she allowed me to do it and I bought the 1981 DeLorean from an original owner in 2008, and then I hired a bunch of prop makers, and I made some props myself, and then I put it on top of the DeLorean. So now we have a replica of the Back to the Future Time Machine.

Q: So you do parades, you go to some other shows. Tell me what you do in the community with the car.
A: People hire me for their events, and I also do charity events – where I met you was a thing called an IWALK – which benefited the ACTS shelter. So I do parades, and like I said charity events, and the people that hire me are like corporate events, people that just have to have a Time Machine for their particular event.

Q: How do the kids like it?
A: Oh man, the kids – well, it depends on what the age of the kids are. Because I’ve seen a 67 year old kid, and I’ve also seen a 3 year old kid. So the threes, maybe up to the ten years old, they don’t really understand what it is. I would say maybe 50/50 – five out of ten understand that it’s the Time Machine from Back to the Future. The other five might think that it’s something from Transformers or whatever else – but it’s like hey, whatever you want it to be man, as long as you’ve got a smile on your face I’m cool with it.

Q: So what is one of the hardest parts you’ve had to do on this car.
A: Well as I said in the beginning, the hardest part was convincing my wife that I could move forward with the project. But once we got past that – boy – the hardest part I guess, building the car, was getting back in some of the cracks and crevices because all of this stuff has to be bolted down, and it has to be bolted down to the push test. I bolted everything so that you could push against it and it wouldn’t come off. And what that would assure is that as I was going 88 miles an hour, that these things wouldn’t fly off and hit somebody’s windshield. So the hardest part was contorting my body and getting my arm back in there to place these stainless steel screws in place, so that I could bolt these things down.

Q: Do you have any events coming up soon that people can come see your car?
A: Right now no, no events at this time. We just had one we had to cancel with Georgetown University. I don’t think that they’ll be redoing that, so right now my schedule is open. But you can see me on Facebook for sure.

Q: And how would they find you on Facebook?
A: It’s facebook.com BTTF – which is Back to the Future – BTTFTimeMachine – all one word.

Check back for more episodes of Community Conversations.