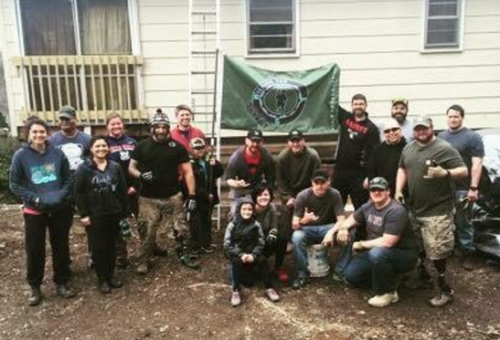 The community, several organizations, volunteers, and Project Mend-A-House (PMAH) came together to help a disabled Vietnam veteran in Prince William.

According to a release, the scope of the repairs and work needed for Mr. F’s home was beyond what PMAH typically does, but they didn’t let that stop them.

They worked with Mr. F to start a GoFundMe campaign which raised $8,500 – including $2,500 from the Gainesville United Methodist Church and $2,500 from Warrior 360, stated a release.

With that funding, PMAH and volunteers from Warrior 360, the Woodbridge Baptist Church, the Lutheran Church of the Covenant, and community youth worked together to help repair Mr. F’s home, according to a release.

“Among the issues that needed to be addressed were replacement of the roof, gutters and garage door as well as the siding, soffits, and fascia. The chimney and patio door also needed repairs,” stated a release.

Virginia State Delegate Rich Anderson and State Senator Jeremy McPike were also a big part of gathering support and donations for the project, stated a release.

“With the help of many volunteers and local businesses, PMAH has been able to provide much needed repairs to the home of Mr F. and make the outside of his home more livable. It is heartwarming to see how the community has pulled together to assist this true American Hero. We are greatly indebted to our community partners who stepped up to get this project done. It has been a privilege to work with them and truly embodies the Project Mend-A-House philosophy of Neighbors helping Neighbors,” stated PMAH Executive Director Jennifer Schock-Bolles in a release.