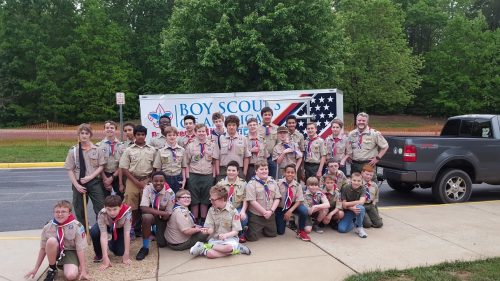 Boy Scout Troop 43 has had a rough month, first with the theft of their trailer – and $10,000 worth of camping equipment – and then the discovery of the trailer in Dumfries, damaged and empty of the equipment.

But things are taking a positive turn, thanks to the generosity of the community.

According to troop leader Roger Henderson, the community has donated $1,000 to Troop 43, and additional equipment donations. The Scouts also got a big surprised from Easterns Automotive Group, according to Henderson.

“Our Scouts were invited to visit the Fox 5 DC news room under the guise of working on the journalism merit badge.  In reality, Easterns Automotive Group was there to donate a new trailer to Troop 43, with [the] BSA and troop logos on it, as well as $2500 in gift cards to help us start filling up the trailer with gear again,” stated Henderson.

Henderson shared this statement about the outpouring of support from the community on Facebook:

To the friends and family of Troop 43, please share this as you see fit: Our Scouts have been in the news a couple of times recently, once because we were the victim of a crime, and once because we were the recipient of a generous donation from a local business that wanted to help us recover. But that is only part of the story. The bigger part, the part that is more important, is how individual members and small groups in our community reached out to help. From fellow Scout Troops, to businesses, to individuals – so many have reached out to assist us in getting back on our feet by providing either monetary donations or equipment. We have even received checks from Florida and NC! Our one big donation may have made the news, but it is the multitude of smaller ones that are truly telling of the caliber of our community. I apologize for not having the presence of mind to say it on TV. From the Scouts, Families, and Leaders of Troop 43, Thank you. ‪#‎Troop43rocks ‪#‎AScoutisthankful

According to Henderson, the Prince William police have had no luck finding the culprits that took the trailer.

The troop is working with the insurance company to file a claim, with the hopes that they’ll be able to further restock the trailer, stated Henderson.

If individuals are interested in donating funds, or equipment, Troop 43 currently needs:

Wheel boot for the trailer

Individuals and organizations interested in donating can send them to BSA Troop 43 C/O River of Grace Church, 15012 Dumfries Road in Manassas.