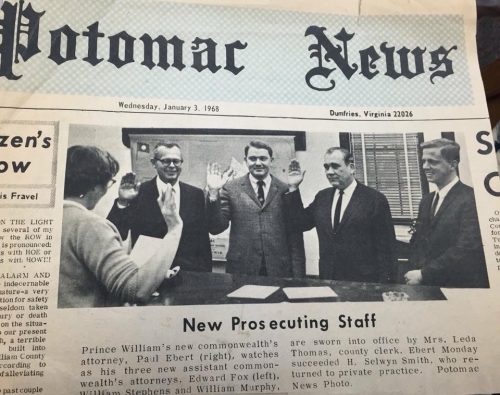 Prince William County’s Commonwealth’s Attorney Paul Ebert has now been serving in his role for 50 years.

Ebert celebrated the 50th anniversary for his role yesterday. He was only 30 years old when he took the position back in 1968.

Ebert works with police departments and magistrates in Prince William, Manassas, and Manassas Park, providing legal advice, and acts as a Special Prosecutor in certain cases.

“No one has done more for criminal justice and in our community over the last 50 years than Paul Ebert. He is known far and wide for his integrity, fairness, intelligence, and sense of humor. He always puts the victim first, yet tempers justice with mercy for defendants. He has not only been a boss to generations of Assistant Commonwealth’s Attorneys, including many who have gone on to be judges, including a Virginia Supreme Court Justice, but he has also been a mentor and a friend as well. They simply don’t make them like Mr. Ebert anymore,” stated Bradley Marshall, who works as an Assistant Commonwealth’s Attorney under Ebert.