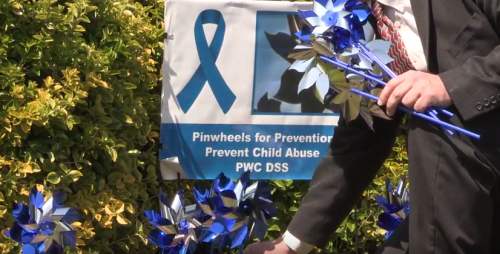 To recognize April as Child Abuse and Prevention Month, several individuals from county agencies and community organizations created a blue pinwheel garden outside of the Dr. A.J. Ferlazzo Building in Woodbridge.

“Pinwheels are a symbol of a healthy, happy childhood that is free of worry, abuse and neglect,” according to a release.

More on the pinwheels, and Child Abuse and Prevention Month, from a release:

Wilson said recognizing the month serves as a reminder for people to be on the lookout for child abuse. “Even though April is designated Child Abuse Prevention Month, it’s important that we raise awareness and that we report our suspicion of abuse all year long.”

Signs of child abuse, Wilson said, include unusual bruising, burns, altered or regressive behavior, fear of people or places and changes in sleep patterns. Signs of neglect might show up as a lack of supervision where children might be home alone at an age where they shouldn’t be unattended.

Wilson said while one sign alone might not “be indicative of abuse or neglect,” people who suspect child abuse can call the county’s child abuse hotline at 703-792-4200. People can also call the 24-hour state hotline at 800-552-7096. “People who feel like a child is in immediate danger can call 9-1-1 because we work jointly with the Police Department,” Wilson said.

The Prince William Department of Social Services works with County’s Police Department, schools, Court Services Unit and several area counseling providers to help prevent child abuse and neglect. Wilson said the teamwork is a vital part of prevention. “All year long, we have many efforts and initiatives that we put in place to bring awareness to child abuse and neglect. The prevention of child abuse and neglect is too big of an issue for it to rest solely with the Department of Social Services. So, it’s very important that everyone in the community takes a role. We all are working together to make sure that the children here in Prince William County are safe.”

The pinwheel was adopted in 2008 by Prevent Child Abuse America, a national organization with the mission to “prevent child abuse and neglect of all children in the United States.” Wilson said the color blue comes from the blue ribbon, which became a national symbol of child abuse awareness in 1989 when Bonnie Finney, from Norfolk, tied a blue ribbon to her van to symbolize her commitment to preventing child abuse after her grandson died as a result of it. “Blue symbolizes the bruises that result from child abuse,” Wilson said.