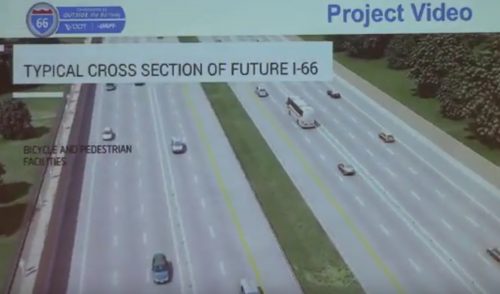 It was all about transportation at a Prince William Chamber of Commerce economic development luncheon at the Manassas George Mason University (GMU) campus.

Mike Discenza from Transurban, Chris Doherty from I-66 Express Mobility Partners, and Supervisor Marty Nohe spoke about different transportation projects and services in the area.

But one piece that stood out were Doherty’s comments on the Transform66 project, which aims to relieve congestion, move 2,000 to 4,000 more people per hour, fund new bus and transit routes, and add 4,000 park-and-ride spaces along I-66, outside of the Beltway, running from I-495 out to Gainesville.

According to Doherty, the projected cost of the project is $3.5 billion.

When the project is complete it will have two Express Lanes and three general purpose lanes in both directions, said Doherty.

The project will also attempt to handle some safety concerns.

“Around Nutley Street and 66, it’s one of the most dangerous cloverleaf intersections in the interstate highway system,” said Doherty.

One of the big changes coming out of the project, specific to the Prince William-area, is the work being done near Route 28.

“At Route 28, interchange improvements will allow for the removal of the four traffic signals along Route 28 between I-66 and E. C. Lawrence Park by mid-2020, providing relief to the Route 28 corridor,” according to the project video.

The project will be incorporating bike and pedestrian paths along the roadway, as well as new ramps and interchanges along the length of I-66.

I-66 Express Mobility Partners is currently in the public hearing phase for their design work, and the deadline to submit comments is November 29.

“We’ve incorporated a lot of community feedback, especially on the bike and pedestrian trails, as well as some of the ramp configurations,” said Doherty.

By the end of the year, Doherty said to expect seeing initial construction work, which will ramp up in the Spring.