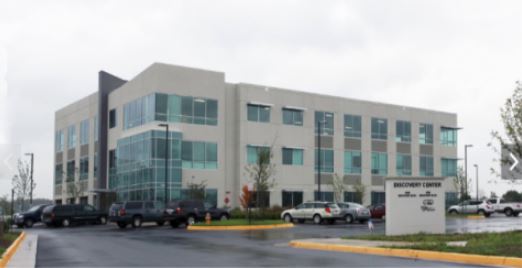 Ceres Nanosciences is “graduating” from their space at the Prince William Science Accelerator at Innovation Park.

The company has been able in the past year to expand its staff and facilities, following the launch of their Nanotrap diagnostic test for Lyme disease.

“The Nanotrap® particle provides enhanced sample processing capabilities to new and existing diagnostic tests for some of the most challenging diseases and conditions, such as Lyme disease, respiratory diseases, emerging infectious diseases and cancer detection, as well as for improved health and wellness monitoring,” stated a release.

Because of this expansion, Ceres will now move to a 9,100 square feet commercial wet lab space at 9400 Innovation Drive in Manassas, across Route 234 from their current space. The move will allow them to begin larger production of the Lyme disease test.

Outgrowing the space is one of the major goals the county had when establishing the Prince William Science Accelerator, which was meant to provide a startup incubator space for bio-tech and life science companies that wanted to do business in Prince William County.

“This marks a major milestone for Ceres. With over 20 peer-reviewed publications and 14 issued patents we have been very successful in validating our technology’s performance through extensive research and development work at the Prince William Science Accelerator. Now we’re moving into a commercial-scale production facility that will allow us to be a solutions supplier to global diagnostic companies and major clinical reference labs,” stated Ceres CEO Ross Dunlap in a release.

In addition to the success of their Nanotrap product, Ceres was recently the recipient of a $50,000 Economic Development Opportunity Fund grant.

“This is a great story of an entrepreneurial team working persistently to build world class technology and facilities in Prince William County,” stated Prince William Board of County Supervisors Chairman Corey Stewart in a release.