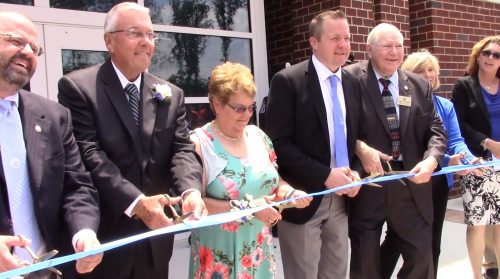 The wait is over for community members interested in seeing the new Central District Police Station.

After the ceremony, attendees had a chance to tour the facility, which is located at 5036 Davis Ford Road in Woodbridge.

The Prince William County Police Department (PWCPD) will also host an open house between 10 a.m. and 2 p.m. on Saturday, according to a release.

Employees from patrol operations and criminal investigations began working at the station in April.

Lake Ridge, Dale City and Woodbridge are among the areas the Central District Police Station serves.

The Board of County Supervisors (BOCS) named the facility after Police Chief Charlie T. Deane, who retired in 2012.

“The opening of the Charlie T. Deane Police Station marks a significant milestone in the Police Department’s history,” Police Chief Barry Barnard said in a release. “The men and women working out of this station will provide outstanding police services to our community. The naming of the station after Chief Deane is a fitting tribute to his leadership, dedication and legacy. His contributions to the Police Department and to the community are many. This police station will stand as a fixture in our community for many years to come. On the behalf of our staff, we would like to thank our community, the Board of County Supervisors and everyone for their continued support of this important public safety project. We are proud to serve you.”

Deane spent 42 years with the department and served as Police Chief for at least 24 years. He was also one of 42 officers the county hired in 1970, when the police department was founded.

“This department is second to none, but we are among a region of just outstanding law enforcement. Northern Virginia, Washington, D.C., has the best of all the law enforcement in the country, I think, and Prince William is right at the top,” Deane told ceremony attendees. “I’m honored to have served here, and very honored to have this lasting legacy.”

Here is the full video: