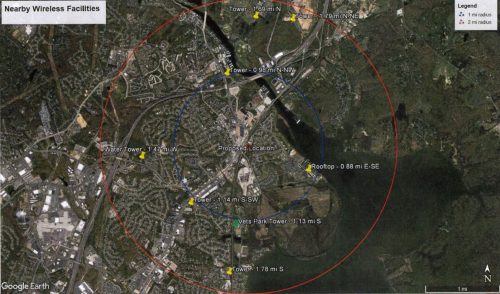 The idea of building a new cell phone tower is off the table after facing opposition from many Prince William residents.

Supervisor Frank Principi’s office announced on Friday that the proposal for a 107-foot “monopole” was “pulled.”

Principi and Milestone/T-Mobile hosted a town hall meeting for community members who wished to comment on the structure.

The meeting took place on January 31 at Belmont Bay Elementary School in Woodbridge.

If it had been approved, the monopole would have been placed at the Woodbridge VRE Station.

Many residents didn’t welcome the idea.

“It was a large turnout and every attendee who spoke was opposed to the monopole in that location,” Constituent Service Manager Meagan Landis wrote in an email. “Opposition was largely centered around the negative impact the residents felt it would have on the aesthetics, property values and potential for redevelopment in the area. There was also opposition based on there not appearing to be a need.”

Principi was also against the proposal.

“I share the concerns expressed by businesses and residents about the negative impacts the proposed 110-foot monopole at the VRE Woodbridge Station will have on their views, property values, and potential for redevelopment of North Woodbridge,” Principi  stated. “Given this, and T-Mobile’s inability to demonstrate the need for a 9th monopole within a two-mile radius, I will oppose the Special Use Permit (SUP) and request T-Mobile to work with residents to collocate future antenna on an existing monopole.”

According to Landis, the company had the option to revise and resubmit its proposal, which was due by Friday.

Any final decisions would have been made by the Board of County Supervisors (BOCS) in May.