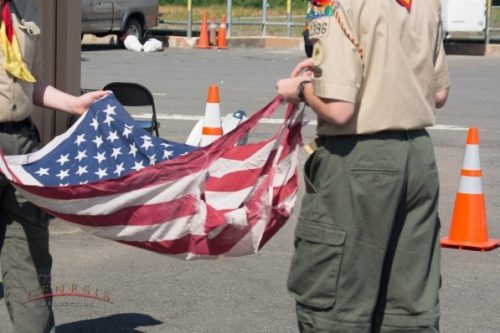 On June 14, the Prince William County Solid Waste Division and the Occoquan District Boy Scouts will be celebrating Flag Day, and the second anniversary of their Flag Collection Center partnership.

According to a release, in the United States Flag Day celebrates the adoption of the United States flag by resolution of the Second Continental Congress in 1777. This officially replaced the British symbols of the Grand Union flag with a new design featuring 13 white stars in a circle on a field of blue and 13 red and white stripes – one for each state.   The United States Army also celebrates its 1775 birth on June 14.”

To celebrate this year, Prince William residents and businesses are asked to bring their worn, faded, and tattered American flags to the special collection bins at the Prince William Landfill or the Balls Ford Road Compost Facility in Manassas, according to a release.

“The flag, when it is in such condition that it is no longer a fitting emblem for display, should be destroyed in a dignified way, preferably by burning. Please do not throw our flag in the trash. Fold it neatly and bring it to one of the Flag Collection Centers during the facilities’ normal operating hours,” stated Occoquan District Scout Master David Byrne in a release.

Boy Scouts staff the two Flag Collection Centers on the 2nd and 4th Saturday of the month from 9 a.m. to 1 p.m. throughout the year, to demonstrate proper folding techniques, and to fold residents’ American flags, according to a release.

“The Boy Scouts in our area with the help of other civic groups like VFW and American Legion and the Prince William County Solid Waste Division will make sure that ‘Old Glory’ gets retired with the respect it deserves,” stated a release.

The Prince William County Landfill will be open on Flag Day from 6 a.m. to 6 p.m., and the Balls Ford Road Compost Facility will be open from 7:30 a.m. to 5 p.m., according to a release.