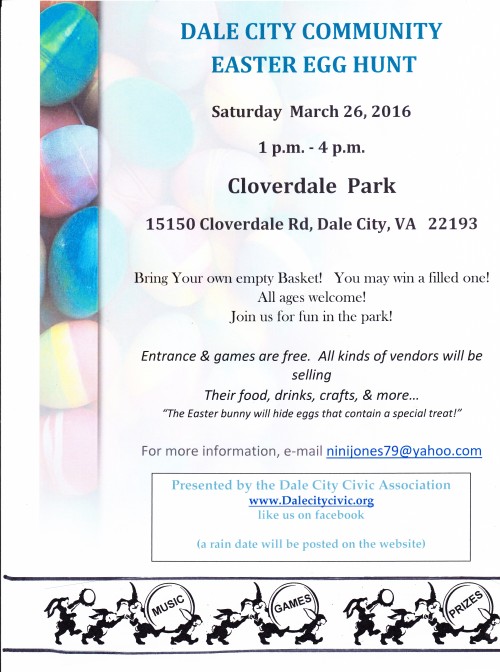 For this week’s Community Conversations, our host ST Billingsley chatted with President of the Dale City Civic Association James Hicks, about the organization and their upcoming Easter egg hunt on March 26.

Q: What is the Dale City Civic Association?

A: Every year we give two to three scholarships to deserving students. Now what we do, we put out applications, and normally we have them answer an essay question. And we put together all of the applicants, and [determine] who’s going to get the three scholarships, from the Dale City schools.

Q: About how many years have you been doing that?

Q: You also have a Land Use Committee. So what does that involve?

A: What the Land Use Committee Chair does is go [to] the land use – Prince William land use – meetings, and give input on different places and things that you want in Dale City.

Where the K-Mart used to be, we are working on getting something there that will beneficial for Dale City.

Q: This past year there was a big meeting about the future of Dale City, where the supervisor had brought in a team of people to talk about [the] 10, 15, 25 year outlook. Does Dale City Civic Association get involved with any of that?

A: Yes. We are called one of the ‘shareholders’ in that whole thing. As a matter of fact, last week we had a kickoff for the Dale City part of that. Supervisor [John] Jenkins brought in a team from across the nation. They [presented] the work for Dale City area. Now, what they recommended was given to the Prince William County board. Now, they’re kicking off the Dale City portion with the Prince William County board.

Q: You have an event coming up here.

A: Yes, on the 26th of March – Saturday, the 26th of March – we’re having our first, and hopefully it will be our annual Easter egg hunt. It’s the first time we’re doing this, and it’s going to be a way to get the community together, have fun, and just get to know each other.
What we’re going to have is – we’re gonna have music, balloons. We’re gonna have food. Also, we’re gonna have a photo studio where people can get in and get their picture taken. Also, we want to make sure that lots of the kids – all the kids – come in and have lots of fun…every egg has something in it. And we have some eggs from the White House – some from this year, some from last year out there, that might have a little ‘change’ in there for the kids.