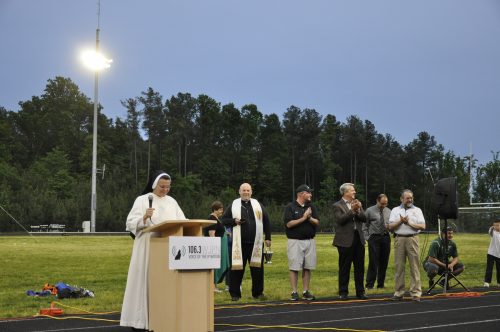 It’s been a busy time for Saint John Paul the Great Catholic High School in Dumfries.

Just last week the school held a ceremony to dedicate their new field lights, and launched their own radio station – 106.3FM WJPN.

The thought of the schooling starting own radio station began when an individual in the community approached the school with the idea.

“The idea of a Catholic radio station in Prince William County was brought to us by Mr. Tom Vetter. He had a desire to share the Catholic faith with commuters on 95 and approached me to see if we might also be interested,” stated Sister Mary Jordan in a release.

According to Sister Mary Jordan Hoover, the outgoing principal for the school, the radio station is a great educational opportunity for the students.

The school worked for two years to complete the FCC application requirements, and after lots of hard work, were approved for the radio station and assigned a station number, according to a release.

This is where the story of the new field lights and the radio station become intertwined. According to a release, the radio project was in danger of being put on hold indefinitely because the school could not find an appropriate place to put the antenna needed for the radio station.

That’s when two members of the community, Mike and Corrine Kosar, stepped in to provide funding for the school’s stadium lights, according to a release. The stadium lights ended up being the perfect place for the radio antenna.

“It turns out that a tall pole on our field was the only feasible place for radio antenna. We are tremendously grateful for the inspired ideas and generous contributions of the Vetters and the Kosars. Their gifts will impact our school and our community for generations to come,” stated Jordan in a release.

The 106.3 WJPN station will broadcast within a 10-mile radius of the school. The station will be running programming from the EWTN Catholic Radio Network for now, while students work on creating their own programming to broadcast, according to a release.

“Next year an introductory broadcasting course will be offered to students covering topics such as ethical use of technology and how to produce professional content. Eventually, student and teacher-created content could include talk shows, broadcasting of a class, schools news, and calling live sports games,” stated a release.