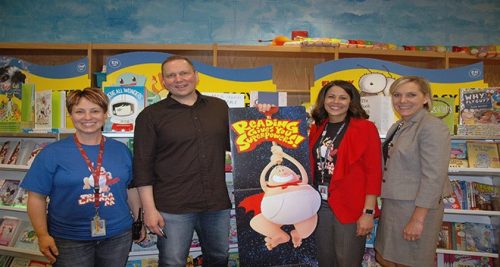 According to a release, Pilkey visited Mary Williams Elementary School to talk about his experiences as a child and as an author.

He told the students how his mom encouraged him to turn his “labels” of ADHD and Dyslexia into positives, and to focus on his drawing skills. He did, and they are now the basis of his stories. Pilkey explained that his second-grade teacher was the inspiring force behind ‘Captain Underpants’ – when, during a class, she said the word underwear and the whole class kept laughing. Pilkey stated, “At that moment, I realized that underwear is VERY powerful.”

He graciously greeted and thanked every student as they left the assembly, and signed the Captain Underpants mural in the hallway by the library – personally leaving every student and staff member feeling appreciated and thrilled to be a part of such an amazing way to start the school year.

Pilkey also provided each student and staff member in attendance with an autographed copy of his most recent book, as well as a free book from the Scholastic Book Fair, according to a release.