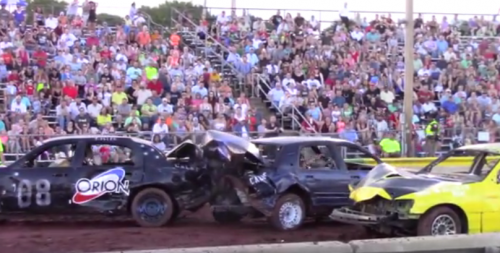 Demolishing cars for a good cause?

That was the theme behind the annual Demolition Derby last Friday at the Prince William County Fair in Manassas.

The Capital Area Law Enforcement Foundation (CALEF) is a non-profit that has been helping seriously injured police officers in the Washington, D.C. Metro area for five years, that was able to raise $10,000 from the derby to help their cause, according to police officer and Vice Chair of CALEF Dave Moseley.

“Each car had to raise a minimum of $500 per car to enter our event, and we’re only racing against each other. It takes months to gather these cars – we pick them up from tow lots, auctions…we put our own money into these things, our own time, and we actually have a blast,” said Moseley.

According to Moseley, CALEF was able to raise $30,000 to help the surviving officers in the tragic shooting incident that took place in Woodbridge earlier this year.

Prince William Assistant Commonwealth’s Attorney Bradley Marshall said that the cause CALEF works for is unique.

Marshall was one of the 11 individuals that took part in the derby.