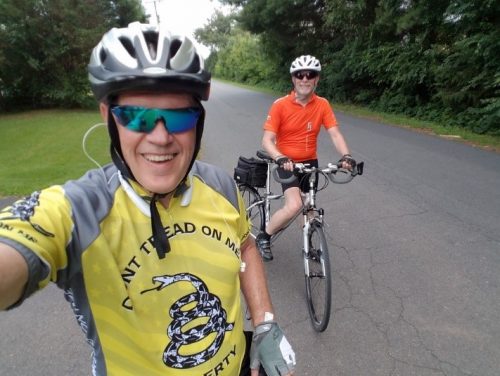 According to a release, his journey which is being called the ‘Patriot Honor Ride’, began in Lubec, Maine on August 1, and is being completed in Key West, Florida over a 60 day span.

West is raising money for Folds of Honor, which is a charitable organization that provides scholarships to the children and spouses of fallen and disabled service men and women, stated a release.

West served in the United States Air Force for 26 years, and led more than 130 combat missions over Iraq and Bosnia, and during Operation Desert Storm, Operation Southern Watch, Operation Deny Flight, and Operation Deliberate Force, according to a release.

West also served as Joint Staff at the Pentagon, and was in the building during the 9/11 attacks, stated a release.

During his journey, West will fold and fly 16 United States flags which are dedicated to the 16 Folds of Honors families from each of the states he will be travel through during his bike ride, according to a release.

“I am raising funds and awareness for Folds of Honor, a non-profit changing lives and supporting the legacies of our finest Americans. I came home from three combat tours and was able to help my three boys get their education and start their adult lives without any obstacles.  Now I want to do my part to help make sure some young person’s future is not left on the battlefield,” Col West stated in a release.

West will be passing through Nokesville in the late afternoon on August 22 for a flag ceremony at Patriot High School, stated a release.

“Beginning on August 1, 2016, my goal is to end the 2,500 miles, a 60-day journey, on my 60th birthday, on October 1. As I enter this season of my life, I want to be able to leverage my experience in some way to make a difference in someone’s life,” stated West in a release.

The following are locations where West will be folding flags, according to a release: