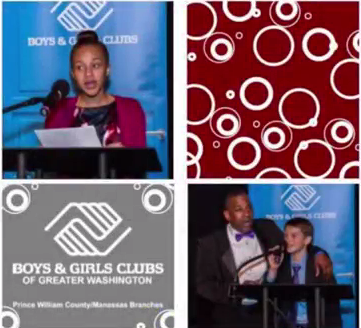 The event, hosted on April 4, at the Hylton Performing Arts Center in Manassas, was a time to honor the volunteers that help keep the Boys & Girls Clubs programs going.

ST Billingsley, owner of Steve’s Auto Repair & Tire, was given the Good Character and Citizenship Award, for his donations and tireless support of the organization’s programs. Billingsley is also a member of the Boys & Girls Club Board for Prince William.

“It is a great honor to be recognized by the Prince William Boys & Girls Clubs. They do great work for kids in our community, and I’m happy to give them my support,” said Billingsley.

Old Dominion VA & Reston Links Chapters received the Academic Success Award. The chapters have been closely involved with the clubs, and have provided educational programs in the areas of public information, education, economic development, and public policy. They also focus on entrepreneurship and STEM programming.
And the Healthy Lifestyles Award went to InTotal Health. InTotal Health is a local organization that assists with Medicaid services and access to healthcare. They’re also a part of the Inova Health System. They’ve partnered with the Boys & Girls Club on several occasions, offering healthy lifestyles programming, youth events, and sponsorship for members to access insurance.

Youth of the Year awards were also given during the event. Faith Moore and Derrick Almond were the winners of this year’s awards.