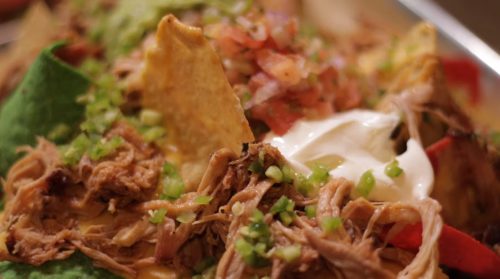 A bite into The Bone

In 2009, Mike Hoover visited his family on the west coast for a summer vacation, and returned home with an idea to start his own restaurant.

Bad to the Bone Smokehouse opened in Gainesville on October 31, 2011. It drew a strong dinner crowd. Hoover stated “we wanted to cater to a business and lunch crowd.” Therefore, they opened their second location, The Bone, in Old Town Manassas in 2014.

According to the website, they eventually shorten the name of the Gainesville location to “The Bone” to avoid confusion between the restaurants.

Since 2015 The Bone has won the title “Best BBQ” by Virginia Living consecutively. Additionally they won a contest with the Chamber of Commerce and the HMI Chili cook off.

There is an array of options to eat at the restaurant. People can choose from homemade pickles, banana pudding pie, fresh wings, salads, BBQ, and smoked turkey and ham around the holidays.

Hoover’s favorite dish is the Pulled Pork Nachos. He said “when it all comes together it’s amazing!” Pat Lytle, Managing Partner, enjoys the Honey Bourbon Wings. This dish is a family recipe, and original to Virginia. Bad to the Bone does not offer this fan favorite. Pat commented “it’s sweet with a little bit of heat.”

If the variety wasn’t enough to pull someone in to try The Bone, then the list of celebrities who had a taste might. The Bone has served Tiger Woods, Nick Sundberg, Tress Way, Chris Brown, Rickie Fowler, Brit Hume, Justin Thomas, and Senator Warner.

Hoover commented Ricky Walker had a bite of their barbeque and said, “This BBQ is as good as anything I had in Texas.”

There is also a food truck that goes to local breweries and wineries and a concession stand in Jiffy Lube Live. The locations for the food truck are posted on their Facebook page.