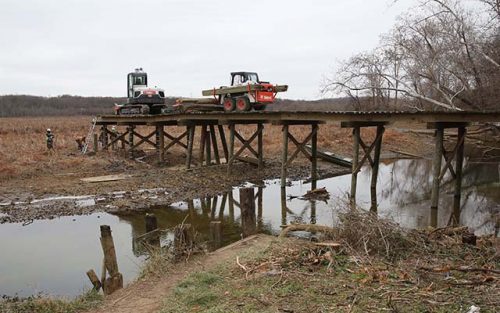 The mile-long trail, which will run over Neabsco Creek to connect the Rippon Landing Community Park to the Julie A. Metz Wetlands Preserve, has started.

Read our earlier coverage of the boardwalk here.

When completed, the boardwalk will become part of the Potomac Heritage National Scenic Trail that stretches between the Laurel Highlands of Pennsylvania to the Chesapeake Bay. The trail will connect from the town of Occoquan down through Belmont Bay, Occoquan Bay Wildlife Refuge, Veterans Memorial Park, Featherstone Wildlife Refuge, and on to Rippon Lodge and Rippon Landing, before crossing the boardwalk to the Metz wetlands. From Metz, the trail connects to Leesylvania State Park, Powell’s Landing County Park and on to the sidewalk of U.S. 1 near Dumfries.

The Board of County Supervisors awarded the contract to build the boardwalk to the Florida-based J.D. James, Inc., doing business as Nature Bridges, in September 2017. The contractor is building the boardwalk from the north landing, just behind Rippon Lodge on Blackburn Road in Woodbridge.

The trail, built of pressure-treated southern yellow pine, will give residents the chance to see some of the natural settings Prince William County has to offer.

“This is a great environmental opportunity for the schools and the public to learn. It’s a beautiful place to see the changing of the seasons. We’re looking forward to having everybody come out in a year from now when we do the ribbon cutting for this boardwalk,” stated Prince William County Department of Parks and Recreation spokesman Gary Rzepecki in a release.

The project is slated for completion in December 2018.