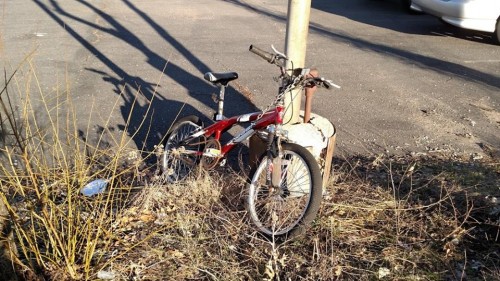 Where are all the bike racks in Prince William? “There’s been no organizations focused on biking, or walking, or transit in Prince William County. There’s been pieces of that – but never any coherent approach to promoting [it],” said Active Prince William member Robert Delach.

The group is currently mapping all of the bike racks in Prince William, and have only been able to find around 30 thus far, according to Delach.

“There are very few bike racks in the county. Almost all of them [that] we’ve been able to find so far are at government buildings. I did a bike ride around [Manassas] and tried to find every bike rack in the area. And I found some, but every single one of them was at a government facility – except for one – which was at a school, that wasn’t a public school,” said Delach.

Delach said that Active Prince William is working with the county to get language added to the County Code that would involve having developers put in bike racks for any new facilities being built, if they have a certain number of residents in residential areas, and a certain number of square footage for commercial areas.

“Right now there’s no guidelines even for if somebody wants to put a bike rack in – where they put it, what it’s supposed to look like – there’s no information about that,”  said Delach.

According to Delach, a big part of the county’s lack of biking, walking, and public transit infrastructure is that Prince William hasn’t made it a priority to invest in it, and is now far behind other localities in Northern Virginia.

“Prince William County – as far as its suburban environment – is 10 years behind on what’s going on in Fairfax, in terms of urbanization, and adding infrastructure to support walking and biking,” said Delach.

The goal of Active Prince William is simply to promote biking, walking, and transit, and to work as a partner with the county to get that accomplished.

“We want to be partners, not adversaries [with the county],” said Delach.

Delach said that if the county decides to invest in these transportation and recreation improvements, it will greatly improve the lives of many county residents.

“It makes for a more livable, healthier Prince William and Manassas. And if we can get people on bikes, and walking, and active, it’s better for everyone physically, mentally – but then it also reduces traffic…and it improves the quality of life,” said Delach.