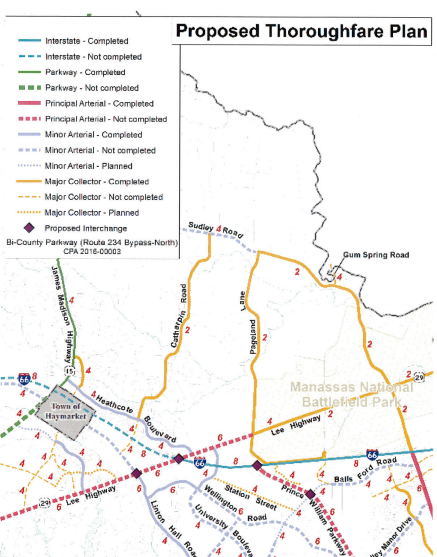 Talk of the Bi-County Parkway was back again, as the Prince William County Board of Supervisors voted to remove the project from the county’s Comprehensive Plan.

The road project, which has been debated for several years now, would be a 10-mile stretch of road that would connect Interstate 66 in Prince William to Route 50 in Loudoun County. During Tuesday night’s public hearing on the project, Supervisor Pete Candland said that it was an easy way for large trucks to head toward Dulles Airport.

Back in 2013, the board voted to conduct a $100,000 study on the project, to see if it should remain in the county’s Comprehensive Plan, according to the Washington Post.

According to county documents, the Planning Commission wanted the board to remove the Bi-County Parkway (234 Bypass North) from the Comprehensive Plans. The county staff did not, stated county documents.

Regardless of the county’s support of the project or not, the Virginia Department of Transportation (VDOT) and the state plan to move forward with the project in some capacity, as the area has been labeled a ‘Corridor of Statewide Significance’.

Residents were mixed when giving their comments about the road, during the public hearing.

Some felt that removing the project from the Comprehensive Plan was abrupt, and not compatible with the plans for the state.

“Amending the county’s Comprehensive Plan this way piecemeal – just pulling this one specific road – is not a very sound [plan]. The Bi-County Parkway is a component not just of the county’s Comprehensive Plan, but again, multiple long-range transportation plans in the region. We understand that building new roads never go without controversy, but the county needs to make sure that it’s making a decision this evening based on policy – not popularity,” said Prince William Chamber of Commerce spokesman Brendon Shaw.

Others felt that the road would pose a safety risk, and would need additional investments to make it feasible.

“The Bi-County Parkway coming online is going to make [Route] 234 exponentially more dangerous of a road to try to get on to. Unless you’re willing to put five or six traffic lights in the Coles District…you need to remove this from the Comprehensive Plan,” said Paul O’Meara.

Another resident, Mac Haddow, stated that attempts to communicate with VDOT about the project have not gone well.

“The reason why we need to remove this from the [Comprehensive] Plan is so when the Commonwealth comes to our doorstep, we can then have a reasonable discussion…we need to restore a balance to the discussion,” said Haddow.

John Merrithew, the Assistant Director of Planning and Zoning for Loudon County – the other county that would be impacted by the Bi-County Parkway – spoke in support of the project, asking Prince William to keep the project in the Comprehensive Plan, until the county conducted a full analysis on their transportation plan.

Following public comment, the board battled over whether it was necessary to remove the Bi-County Parkway from the Comprehensive Plan.

“This was a road that was pushed from the top, down. And we need to reverse that. I was not elected to work on [behalf of] the folks of Loudoun County, or the folks of Fairfax County…this road was originally presented as a truck corridor,” said Candland.

Candland suggested that a taskforce be formed, so that stakeholders in the community could come up with their own routing plan to present to VDOT.

Supervisor Maureen Caddigan’s focus was on the challenges her district’s residents would face, if the project ever came to fruition.

“Nobody’s really thinking about [this]…people who have bought their homes, [that are] paying high mortgages…there are a lot of homeowners that have lived here, and are very upset,” Caddigan said.

For Supervisor Marty Nohe, his concern was that voting to remove the project from the plan was sending the wrong message to VDOT and the state. Nohe also expressed concerns about the fact that vocal promises were made at a previous board meeting to only vote on this measure as a full board, but Chairman Corey Stewart was not present at Tuesday’s meeting.

“I’m concerned about the process we’re using here. The reality is, if we do this, the message that’s being sent is that Prince William County is abandoning the north-south corridor,” said Nohe.

Supervisor Jeanine Lawson proposed a resolution to remove the Bi-County Parkway from the Comprehensive Plan, to add language to the Comprehensive Plan noting that the state has identified the area as ‘Corridor of Statewide Significance’, to initiate a Comprehensive Plan update to identify alternatives for the project, and to have the county staff develop a plan to work with the community to find solutions.

The motion passed, with Supervisors Anderson, Caddigan, Candland, and Lawson in favor. Supervisors Jenkins, Nohe, and Principi were opposed.