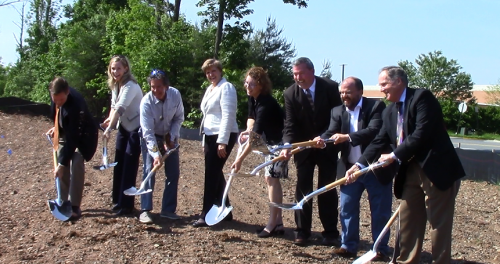 BerkleyNet, a company that specializes in workers’ compensation insurance, held the groundbreaking for their new facility at Innovation Park in Manassas.

The company began with an office in Woodbridge, and has grown to the point where they now need additional space.

According to a release, the new building, which is being developed by Buchanan Partners, will be three-stories and 72,500 square feet. Construction is already underway.

Elected officials, and staff from BerkleyNet and Buchanan Partners gathered to celebrate the groundbreaking.

“Here in Prince William County we continue to stay focused on driving economic development. We’re doing everything we can to be a business friendly county…we are thrilled to have BerkleyNet [headquarters] here,” said Supervisor Jeanine Lawson.

Over the years Innovation Park, a business park for science and technology, has grown and developed into a hub for companies in Prince William.

“Today’s groundbreaking is another important milestone in the development of Innovation Park.  It is part of the ongoing realization of the vision for Innovation Park – a vision that was borne several decades ago.  The Park has evolved considerably from the establishment of George Mason University’s lone academic building in 1992 followed by the attraction of its first corporate client, American Type Culture Collection (ATCC) in 1998, to what we see before us today – a thriving, university-centered research and corporate park, the only one of its kind in the Washington DC Metro area,” stated Lawson in a release.

According to a release, Innovation Park is now home to more than 30 companies and jobs for 2,300 people.

The building is slated for completion in 2017.