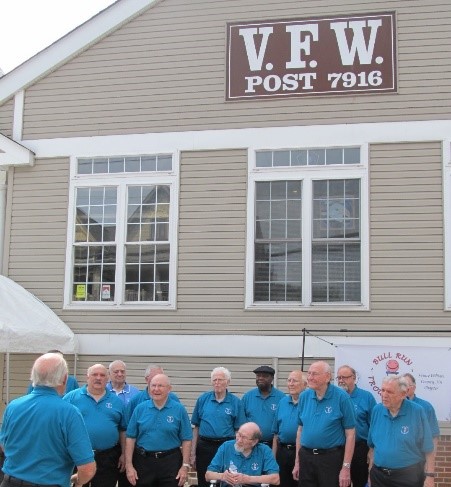 As part of the festivities, The Bull Run Troubadours – a barbershop harmony chorus – performed a variety of songs in front of VFW Post 7916 on September 25.

More on VFW Post 7916’s activities, from a release:

The many Occoquan Town Volunteers stop by Post 7916 for food and refreshment.

All through the Craft Fair, VFW Post 7916 distributed “Buddy Poppies.”  The VFW began the tradition of the Buddy Poppies in 1922 just after World War One in memory of the millions who were killed around the world in that war.  Originally inspired by Canadian Army Colonel John McCrae’s famous poem “In Flanders Fields”, the poppy was chosen to represent the blood shed by American service members during World War I. Since its inception, Buddy Poppies have been and are still assembled by disabled, hospitalized and aging Veterans in VA hospitals.