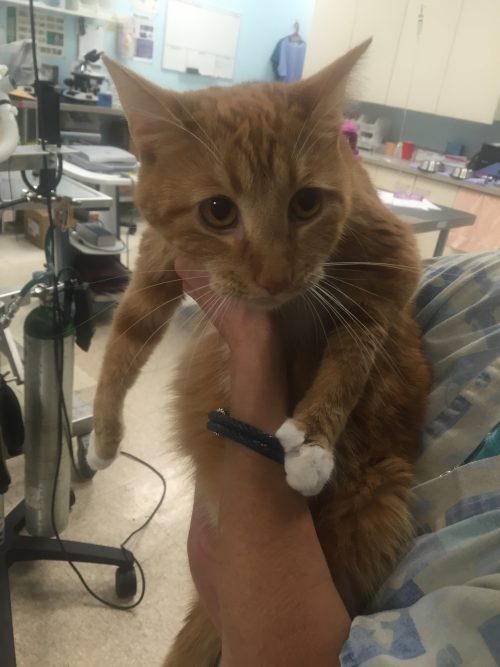 That is the mission of Loving Touch Animal Hospital, which was started back in 2012 by Saint Seton’s Orphaned Animals, an area non-profit organization.

According to Saint Seton’s Orphaned Animals Executive Director Jeanette Allard, the animal hospital got off the ground with grant funding from the Jessica Beath Foundation and Petsmart Charities.

The hospital is located at 618 Cambridge Street in Fredericksburg, and “the mission of the hospital is to reduce euthanasia of companion animals,” stated Allard.

According to Allard, many families are put in a position where they need to put their animals down, simply because they cannot afford the cost of providing the animal with medical treatment.

“We found as much as 40 percent of the intake at municipal shelters are animals who need treatment, which may include surgery, but their families could not afford it.  If you look at our website, we have set fees for the most common surgeries which can lead to euthanasia of treatable animals,” stated Allard.

Loving Touch Animal Hospital works to provide far more affordable medical and veterinary services for household pets, so that these animals do not need to be put down.

“We do provide veterinary care at a reduced cost but, we do not cut corners.  I am very proud of our doctors who are excellent in both the medical aspects of veterinary care and surgery,” stated Allard.

In addition to typical veterinary and medical services, the animal hospital also offers affordable dental services for pets, which can also be quite costly for pet owners.

“We also offer affordable dentistry because many people are not able to afford the cost of extractions of bad teeth or cleanings.  Bacteria from infected teeth invades the blood stream and damages vital organs.  Most people do not realize oral health is very important for their pet’s overall health,” stated Allard.

One of the most common surgeries that Loving Touch Animal Hospital performs are spaying and neutering procedures. According to Allard, the hospital will even transport in animals from counties like Prince William, due to the lack of alternative affordable options.

For Allard, spaying and neutering is very important for those that are considering being pet owners.

“Spay/neuter is important because it prevents health problems down the road.  One of the saddest situations we see are female dogs and cats suffering from mammary tumors which can be cancerous or an pyometra, an infected uterus.  In case you didn’t know, ‘pyo’ means uterus and metra means, ‘pus.’ I think you get the picture.  The infected uterus is often an immediate, costly, life threatening emergency.  Un-neutered male dogs suffer from infections of the prostrate, anal tumors, prostate cancer and cysts which can be avoided by eliminating the male hormone by neutering.  Un-neutered cats exhibit behavioral problems.  They tend to spray in the house and howl to be let out to breed.  The cat overpopulation is enormous in our area and nationwide.  Cats breed as much as four times per year and they do want to breed,” stated Allard.

The animal hospital has had many success stories. One of these stories is the story of a cat named Scrunchy.

“Scrunchy…sustained a severe injury to his paw.  So much so, he could barely use it.  We used inexpensive cold laser therapy to treat the paw and Scrunchy was able to walk again,” stated Allard.