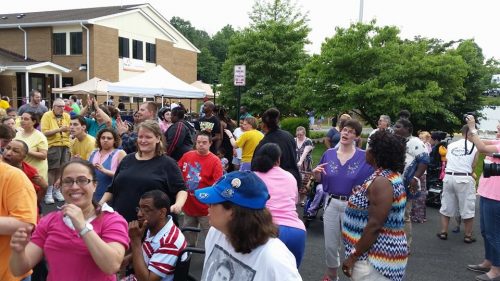 With the General Assembly in session in Richmond, several non-profits and organizations are speaking up about what their constituency groups need.

For the Arc of Greater Prince William, the request is seemingly simple – “get people off the waiting list” for Medicaid services. But that could prove to be a challenge in Virginia.

Individuals with a disability in Virginia are placed on a list for what’s called a Medicaid waiver, which is a system that allows these individuals to qualify for a waiver to get a variety of medical services, therapy, and access to developmental programs.

There’s a waiting list for these services, and each year slots become available that these individuals can access. Currently, more than 11,000 people are on Virginia’s wait list.

“There’s 11,000 plus people on the wait list. And so because of the [state budget] shortfall…[McAuliffe] recommended that it kind of slows down – that we don’t add as many waiver slots as he originally proposed in his biennium budget,” said The Arc of Greater Prince William Executive Director Karen Smith.

“[Our son] just recently got off the DD – developmental delay wait list…days before our ninth anniversary of being on that list. There are many people who are on the ID wait list who waited longer. The state is in the process of closing down the training centers, and selling the land. That money needs to be repurposed into clearing those wait lists,” said Manassas Park School Board member Rachel Kirkland, whose son is diagnosed with autism.

Last year, a Medicaid waiver reform process started in Virginia that has changed how individuals with physical, developmental, and intellectual disabilities receive a variety of services.

In addition to a new scale that changes how these individuals are assessed and provided with services through their waiver, there have also been changes to rates for these services that are a challenge for organizations like The Arc.

Smith said that prior to the reforms, The Arc and other organizations were able to get a customized rate for individuals based on their needs, and this allowed this organizations to feasibly support those needs.

“Our big thing locally though, happens to be with this rate thing. We’re in a Medicaid waiver reform situation right now, and they just started it in September…it is a nightmare to deal with. We have several hundred thousand dollars in outstanding bills on the state level, because they haven’t got everything put together on it. I don’t know how small agencies, quite frankly, are even operating,” said Smith.

According to Smith, these lack of available services and funding for individuals with disabilities has some real consequences in Prince William County and beyond.

“Many of the folks who graduate from high school who have a fairly significant intellectual disability are sitting at home now. And there’s no support services available whatsoever. There’s no day services available. If they live with their family, they are now at home with nothing to do. And all of the school things they have learned have gone out the window,” said Smith.

Smith and other disability advocates have been pushing for legislators in the General Assembly to take action.

“What the Arc of Virginia and us are saying right now is, our big thing is, we need more people to be able to get services. Because some of these cases are really, really sad. Pass legislation to increase the number of Medicaid waiver service slots – get people off the waiting list…and also to be able to customize the rate so that people who have high need are going to be able to get the support they require,” said Smith.

Smith is encouraging residents to volunteer with The Arc or to reach out and lobby their state representatives.